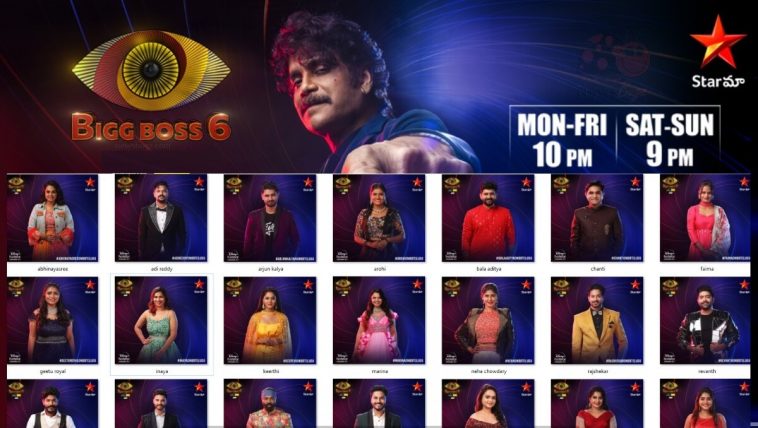 Bigg Boss Telugu Season 6 is a reality game show hosted by Nagarjuna Akkineni. It is one of the popular television shows that air on Star Maa. The show streams online on Disney+ Hotstar. The new season started on 4th September 2022. Bigg Boss 6 Telugu vote online results will be updated regularly.

Bigg Boss Telugu season 6 online voting results will be shown here. You can also vote for your favorite housemates who want to be played till the end. Through this poll, you can guess who will be evicted this week from the house. Also, you can know who is the people’s favorite contestants.

Going through the online poll, Revanth gets more vote while Srihan and Chanti receives a lesser number of votes.

Here you can check the list of Bigg Boss Telugu nominations week-wise (Updated),

Bigg Boss is a typical game show where the winner will be selected by the audience. It was adapted from the international series Big Brother which is developed by Endemol. The game will be played by 21 contestants with tough tasks and facing nominations from the co-participant. They will be surviving for more than 100 days inside the home without any outsourcing. Using the online voting option, the contestant will be evicted from the house.

Bigg Boss Telugu has completed five seasons successfully. The first season was hosted by Jr NTR, the second one by Nani, and Tollywood superstar Nagarjuna Akkineni is hosting the show from the third season onwards.

The show is telecasted on the Star Maa channel.

What Is The Telecast Timing of Bigg Boss Telugu 6

BB6 highlights will be telecasted from Monday to Friday (Weekdays) at 10 PM and Saturday to Sunday (Weekends) at 9 PM.

The streaming rights of Bigg Boss Telugu were bagged by Disney+ Hotstar. The show will be streamed 24/7 on this platform.

How Contestants Will Get Eliminated From The Show

Every week, all the housemates will nominate some of their co-contestants for elimination. They will be facing an audience poll to get saved. If their play inside the house doesn’t impress the audience, they will be get evicted by receiving less number of votes.

How To Save Contestant From Elimination

You have to cast a vote for your favorite contestant from eviction. There are two methods of voting available to save the nominated contestant, one is online voting (through Disney+ Hotstar) and the other is by giving a missed call.

Step 4: Click on the banner of Bigg Boss Telugu 6.

Step 5: The nominated contestants with photos and names will appear on the screen.

Step 6: Click on the photo to cast your vote.

Step 7: You can cast 10 votes maximum. Tap on the photo to cast one vote and with each tap, it gets increases up to 10.

NOTE: You can also split these 10 votes among different contestants. Users can cast 10 votes per day.

The online vote for Bigg Boss Telugu will get started by 10:30 PM every Monday and will be ended by Friday at 12 PM.

Who Are The Winners Of Bigg Boss Telugu Title?

Based on the public vote, one of them will be the winner of Bigg Boss Telugu Season 6. The winner will get prize money of Rupees 50 lakh along with the BB trophy (Eye Shaped).

According to sources, other finalists will bag a cash prize of Rupees 1 lakh.

What Is The Start Date of Bigg Boss Telugu 6

What Is The End Date Of Bigg Boss Telugu Season 6

The show ends on December 18, 2022 (Sunday) with the grand finale. There will be only three contestants playing in the final week of the show. The third runner will be welcomed by the previous season’s winner and the other two will be announced on the stage by the host Nagarjuna.