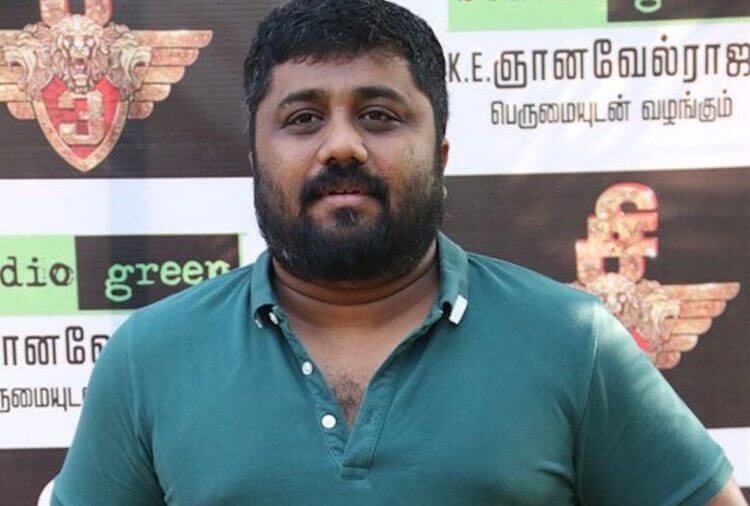 K. E. Gnanavel Raja is an Indian entrepreneur and film producer, who predominantly works in the Tamil film industry. He made his production debut with the movie “Sillunu Oru Kaadhal,” directed by N. Krishna in the year 2006. Before he started his own studios Studio Green, Aadnah Arts and Blue Ghost Pictures, he produced and distributed the movies of Suriya and Karthi. Check out below for K. E. Gnanavel Raja Wiki, Biography, Age, Movies, Images and more.

K. E. Gnanavel Raja was born in Chennai, Tamil Nadu, India. Gnanavel Raja family and graduation details will be updated soon. He completed his schooling in St. Bede’s Anglo Indian Higher Secondary School, Chennai. Gnanavel Raja wife name is Neha Gnanavel, a costume designer of Tamil film industry and the couple has a daughter. During his school days, he was interested to become a film producer, so he regularly skiped his school and watched films in nearby Devi or Sathyam cinema halls. Moreover, he is distantly related to Sivakumar‘s family, though he was identified by the media as the cousin of actors Suriya and Karthi. In the year 2006, he launched his production company “Studio Green,” and entered into the production business with the debut movie “Sillunu Oru Kaadhal,” starring Suriya and Jyothika in the lead role. Then he solely collaborated with actor Suriya’s brother Karthi as a producer or distributor for his movies till 2012. He produced and distributed the movies of Suriya and Karthi such as Paruthiveeran, Singam and Naan Mahaan Alla.

As a distributor, Gnanavel Raja’s first success from another actor’s movie was through “Attakathi,” and subsequently enjoyed the further success from the distribution of Kumki and Soodhu Kavvum. After the commercial failures of Alex Pandian and All in All Azhagu Raja, he tasted the success of small-budget productions like Pa. Ranjith‘s Madras, Indru Netru Naalai and Kadhalum Kadandhu Pogum. Likewise, in the distribution, he experienced the success with the movies like O Kadhal Kanmani, 36 Vayathinile and Trisha Illana Nayanthara. In the year 2016, Gnanavel Raja has been involved in series of conflicts with other filmmakers, at last, he effectively raisied his profile as a person in the film industry. In the year 2017, Gnanavel Raja was elected as a Secretary of Tamil Film Producers Council, but he resigned it in seven months. He hoped to become the President of Chennai Kanchipuram Thiruvallur District Film Distributors Association, but he failed. Along with the Studio Green Productions, he started two other companies named Aadnah Arts and Blue Ghost Pictures. He has two horror films set for release in 2018.

K. E. Gnanavel Raja Facebook: Yet to be updated

K. E. Gnanavel Raja Instagram: Yet to be updated