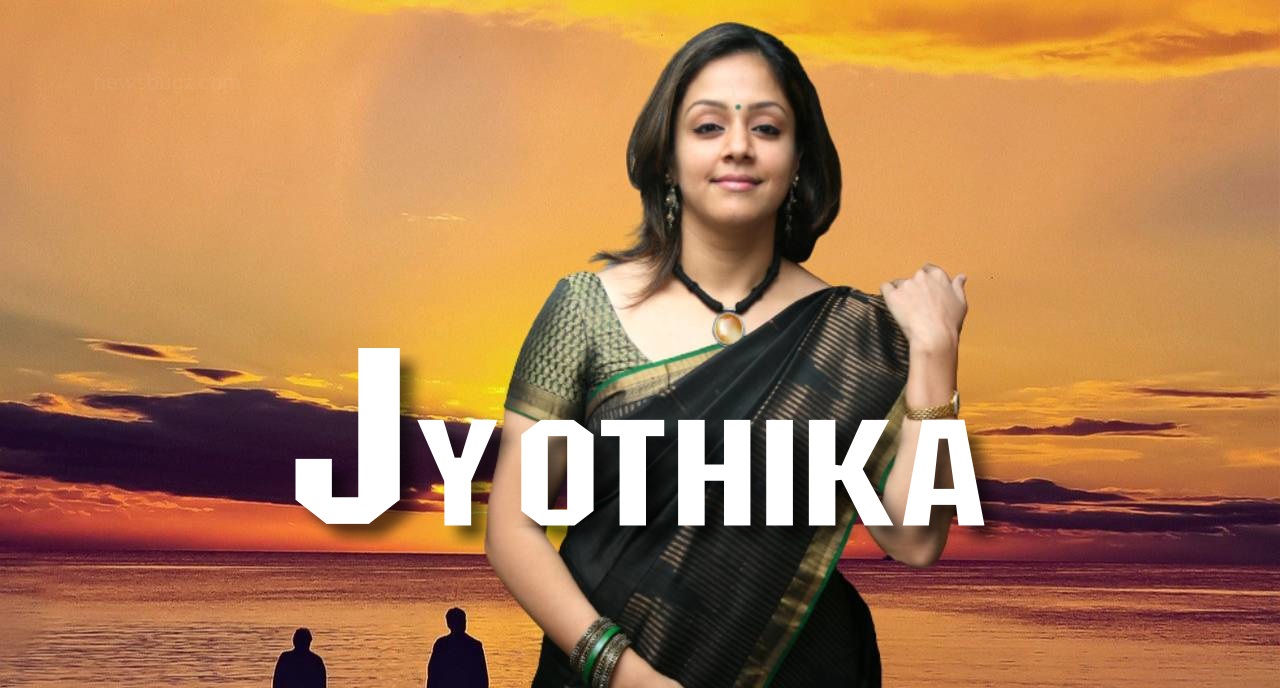 Jyothika is an Indian movie actress, who predominantly appears in the Tamil film industry. She not only appears in Tamil movies, but she also acted in Kannada, Malayalam, Telugu, and Hindi films as well. She made her debut movie Doli Saja Ke Rakhna directed by Priyadarshan which is a Hindi movie. Then her debut Tamil movie is Valli starred with Ajith Kumar and her debut Telugu movie is Tagore starred with Chiranjeevi. Recently her movies like Nachiyaar, Chekka Chivantha Vaanam, Kaatrin Mozhi, Raatchasi, Jackpot, and Pon Magal Vandhal are huge successes. Her husband and well-known star in Kollywood Surya attended Nayanthara and Vignesh Shivan’s wedding.

Jyothika was born on 18 October 1977 in Mumbai, Maharashtra, India. Jyothika family is now residing in Chennai, Tamil Nadu, India. Her father name is Chander Sadanah and her mother name is Seema Sadanah and she has a sister Roshini (born Radhika) and a brother Suraj who is an assistant director for Priyadarshan. The former Indian actress and politician Nagma is the half-sister of Joythika.

She did her schooling in Learner’s Academy, Mumbai and did her graduation in Mithibai College in Mumbai. Jyothika husband name is Suriya who is an Indian actor and they both got married on 11 September 2006. She has paired him with seven films; Poovellam Kettuppar, Uyirile Kalanthathu, Kaakha Kaakha, Perazhagan, Maayavi, June R and Sillunu Oru Kaadhal. Then this couple was blessed with two childrens a daughter named Diya who was born on 10 August 2007 and a son Dev who was born on 7 June 2010.

Jyothika started her acting career with the Hindi movie Doli Saja Ke Rakhna which is directed by Priyadarshan. Then in the year 1999, she worked in the movie Vaali which is directed by S. J. Suriya for this movie she won Filmfare Award for Best Female Debut – South and Dinakaran for Best Female Debut. Then she appeared in the movie Poovellam Kettuppar along with her husband Suriya. Her breakthrough movie is Kushi in this movie she featured with actor Vijay and the movie is directed by S. J. Suriya and then she featured in various movies like Mugavaree, Dum Dum Dum, and Snegithiye. Then in the following years, she featured in various Tamil, Kannada, and Telugu movies as well.

Moreover, she featured most of the leading actors like Kamal Hassan, Vikram, Vijay, Ajith Kumar, Silambarasan, and more. Jyothika has supported several brands like Idhayam oil and Paragon footwear in the early 2000s. Moreover, she is the brand ambassador for RMKV silks and sarees and Wardrobe Hub in Chennai. Then along with her husband, she featured in some ads like Aircel and Nescafé. Then she is the first-ever brand ambassador for the Zee Tamil channel, and she features in the channel’s extensive multi-media campaign as its voice.

Other Awards and Honours

Here are the cool new photos of Jyothika,