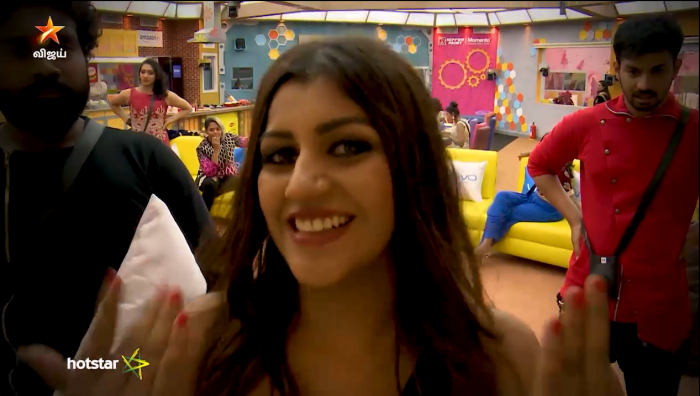 In the second promo, Ponnambalam is reading a task from a paper given by Bigg Boss. The task is to find the three envelops hidden in the bedrooms of the housemates. And once again Mumtaz is complaining about Senrayan to Bigg Boss that he is touching the girl’s belongings. In the third promo, Anand Vaidyanathan and Ponnamabalam were singing together a retro song in the veranda. And inside the Bigg Boss house, the youngest contestant Yashika Anand is cracking a joke in front of the camera for which the housemates burst into laughter.

Bigg Boss Tamil Day 1 Highlights: The day starts with Oviya teasing the contestants. Oviya was not able to act and she confesses that she is just a guest to the show. Bigg Boss calls out Oviya’s name and asks her to leave through the main door. Contestants seem to be happy and they enjoy each others company. Ponnambalam is seen practising singing with Anand. Yashika is seen having fun with Danie and Sendrayan. Danie is very concerned about his inner wears as Bigg Boss didn’t send his suitcase.

The task for electing the leader comes out. Bigg Boss gives a task to find three letters inside the bedroom. Everyone started searching it while Mumtaj gave a reply, “Not to touch girls clothes”. At last Mahat, Janani and Mumtaj complete the task. Janani was elected as the leader after asking everyone to vote. She chooses three teams Cooking, washing and cleaning. Each team contains three members. Mumtaj, Nithya and Mahat go to the cooking team. Danie, Sendrayan and Yashika go to cleaning. Anand, Rythvika and Aishwarya go to the washing team.

And finally, the nomination takes place. Anand, Mumtaj, Rythvika and Nithya gets nominated for the first week. But there is no eviction for the week as mentioned by Kamal Haasan.