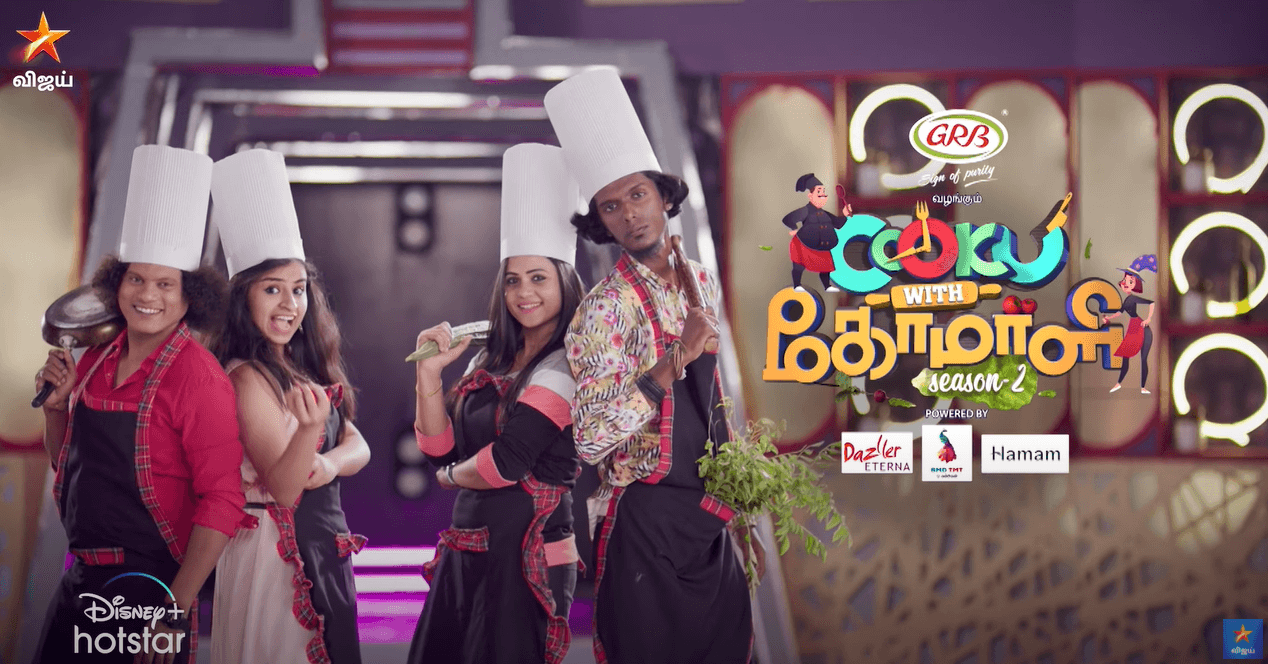 Watch Cook With Comali 2 Episodes Online: The second season of popular cookery show has come to an end. Ashwin, Baba Bhaskar, and Kani Thiru is the finalist of the show. Cook With Comali 2 grand finale is likely to be held on 4th April 2021 (Sunday). The official announcement will be made soon. Cook with comali 2 winner will be announced by Chef Damu and Venkatesh Bhat with some celebrity chief guest. Watch all the latest episodes of Cook with comali 2 online on Disney+ Hotstar.

Choose your favorite contestant of Cook With Comali season 2,

Cooku with Comali season 1 is one of the blockbuster cooking reality show that aired on Star Vijay TV. Celebrity chefs Venkatesh Bhat and Damu are the judges of the show. Presented by GRB Ghee, the show starts from 14th November 2020. Few Vijay tv stars like Pugazh (comedian), Vetukili Bala (comedian), Manimegalai (VJ), Shivangi (singer) came to the limelight after this show. Watch all the latest episodes of Cooku with Comali Season 2 (2020) online on Disney+ Hotstar.

Here are the complete list of contestants who will be entertaining us with some comedians.

Cooku With Comali Season 2 Timing: The show will be aired on weekends (Saturday & Sunday) at 6:30 PM.

The first promo of Cooku with Comali Season 2 was released and fans are on excitement to witness the sequel. Watch Cook with Comali 2 promo here,

Shakeela is a popular south indian actress known for her bold works in malayalam film industry. She was acted in more than 250 films till date. She also appeared in many television shows as a judge and chief guests.

Dharsha Gupta is an aspiring actress and model who works mostly in Tamil television industry. She got fame after her latest sizzling photoshoots went viral on social media. She doing a key role in Sethoorapoovae serial aired on Star Vijay TV.

Baba Bhaskar is a popular dance choreographer and director worked in Tamil and Telugu film industry. He was one of the contestants in Bigg Boss Telugu Season 3 hosted by Akkineni Nagarjuna. Baba Bhaskar also appeared in other television shows like Dhee Jodi, Sa Re Ga Ma Pa The Next Singing ICON (2020) and more.

Kani Thiru is a popular host known for her game show Sol Vilyattu which is aired on Makkal TV. She is the daughter of Agathiyan and elder sister of actress Vijayalakshmi and Niranjini.

Dheepa Shankar is a Tamil actress who works in the Tamil film and television industry. Some of her popular movies are Kadaikutty Singam, Muthukku Muthaga, and more. She also featured in serials like Senthoorapoovae, Zee Tamil’s Nachiyarpuram.

Ashwin Kumar is a actor featured in some tamil films and television serials. He did a lead role in Rettai Vaal Kuruvi serial and Ninaika Therintha Manamae.