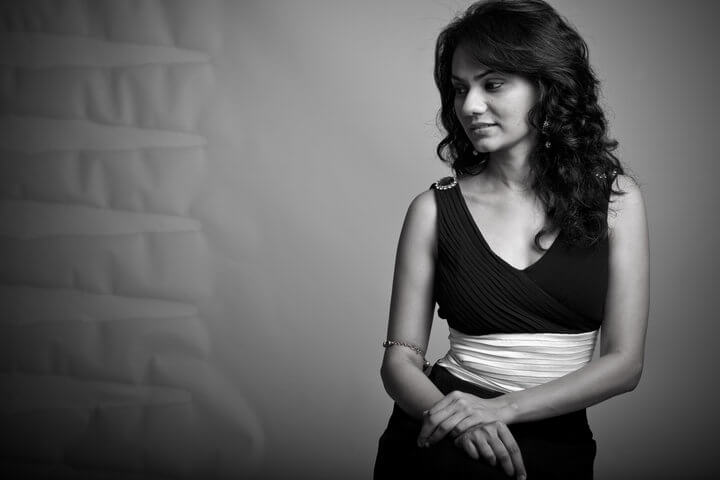 Tanvi Shah is an Indian playback singer, who predominantly works in Tamil film industry. Moreover, she is the first Indian women who won the Grammy Award. She also sings songs in other languages like Hindi, Telugu, Spanish, Arabic, Portuguese as well as in other Latin languages. She made her debut song in Tamil named “Yakkai Thiri” for the movie Aayutha Ezhuthu and the song was composed by A. R. Rahman in the year 2004. Then she made her debut Hindi song “Fanna” for the movie Yuva and this song also composed by A. R. Rahman in the same year. Check out below for Tanvi Shah Wiki, Biography, Age, Songs List, Family, Images and more.

Tanvi Shah was born on 1 December 1985, in India. Tanvi Shah family, education and other details will be updated soon. She started her singing career in the year 2004, form the song “Yakkai Thiri” for the movie  Aayutha Ezhuthu. Once after she joined with A R Rahman she has sung numerous songs for him that includes the song from the movie Sillunu Oru Kadhal, Slumdog Millionaire, and she also has sung recently in Delhi-6. She has also written the Spanish lyrics for “Jai Ho”. After the huge success with AR Rahman, she received an invitation from some of the famous music directors like Yuvan Shankar Raja, Amit Trivedi and other music directors as well. She shared the Grammy Award for the Best Song Written for Visual Media with A.R. Rahman and with Gulzar in the 52nd Grammy Awards for the song Jai Ho, just for writing the Spanish lyrics for the song. Once after the success of Slumdog Millionaire, she appeared in Snoop Dogg’s song “Snoop Dogg Millionaire“. She not only grabbed the Grammy Award she also received the BMI Award in 2009 in London for the same song, where she also shares the World Soundtrack Award (2009) with Rahman and Gulzar.

Tanvi Shah has also performed with Yuvan in a Live in Concert in January 2011 that held in Chennai and in Malaysia at the KLIMF in the year 2012. Then she performed at the Coke Studio concert at IIM Bangalore on 22 November 2013, along with Amit Trivedi. Where she has done her fair share of playback singing for the film industry in India, with that, she is an International star. As she is a versatile singer she can sing songs in several languages and she has won her fans across the world. Her capacity of singing has been proven by the collaborative work with international music producers such as Gio Ortega (USA), Jeremy Hawkins (USA), Che Pope (USA), David Batteau (USA), and DJ Salah of Germany. Tanvi Shah has walked in the green carpet at the Latin Grammy in the year 2011 for promoting her song, “Lluvia Lejana”, with Gustavo Alarco, with that, she has recently shared the stage with Lebohang Morake who is the South African singer and composer, and he is  famous for arranging and performing the music for The Lion King movies and its stage productions.