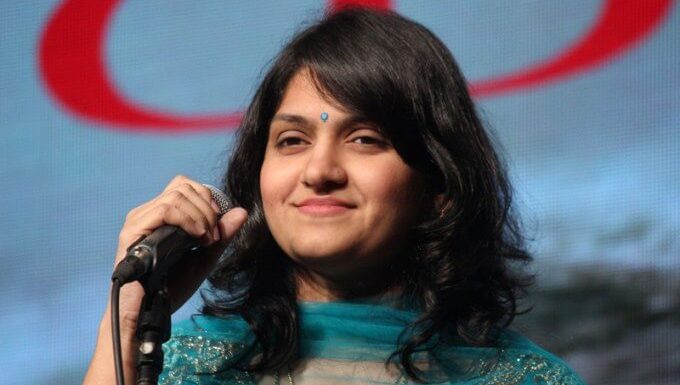 Harini is an Indian film playback singer and classical singer, who sings predominantly in Tamil films. Harini has showcased her singing in several languages other than Tamil like Hindi, Malayalam, Telugu and Kannada language films. She has worked with almost every famous film composers in Kollywood. She considers legendary singer K. S. Chitra as her inspiration which she has quoted in many interviews. She then married another playback singer Tippu. Check out below for Harini Singer Wiki, Biography, Age, Songs, Husband, Images and other details.

Singer Harini was born on 30 April 1979 in Chittoor, Andra Pradesh. Her parents are Sridharan and Lakshmi. Currently, she is a mother of two children. Though Harini’s mother tongue was Telugu she was very fluent in Tamil from the beginning and thus she was able to excel singing in Kollywood. Harini learned Carnatic music from Gowri and Radha Viswanathan from the age of four. Later, she learned from Sudha Raghunathan and is currently learning from Suguna Purushotthaman. If not music she was interested in learning computer and she would have done My Masters degree in Computer applications, which she answered in an interview. But while studying her ambition was to become a charted accountant.

Harini was an active student back in school participating in all competitions and in one such competition which she won, the prize was awarded to the winners by A. R. Rahman and invited the winners to his studio to record their voices. Following that Suhasini Maniratnam called her up to sing “Nila Kaigirathu” for her first film Indira, which was her very first song at the age of 15. Since then, she received continuous offers from various music directors across South India. After successfully spanning her career for two decades, she has sung over 2000 film songs and several album songs, most of them in Tamil. Harini is famous for Harini singer hits and Harini singer Telugu songs list among the fans. Harini singer claims to have known all her songs by heart at any point in time.

Harini has been nominated for several popular awards in the singing category and has bagged many of them. Some of her awards are as listed below,