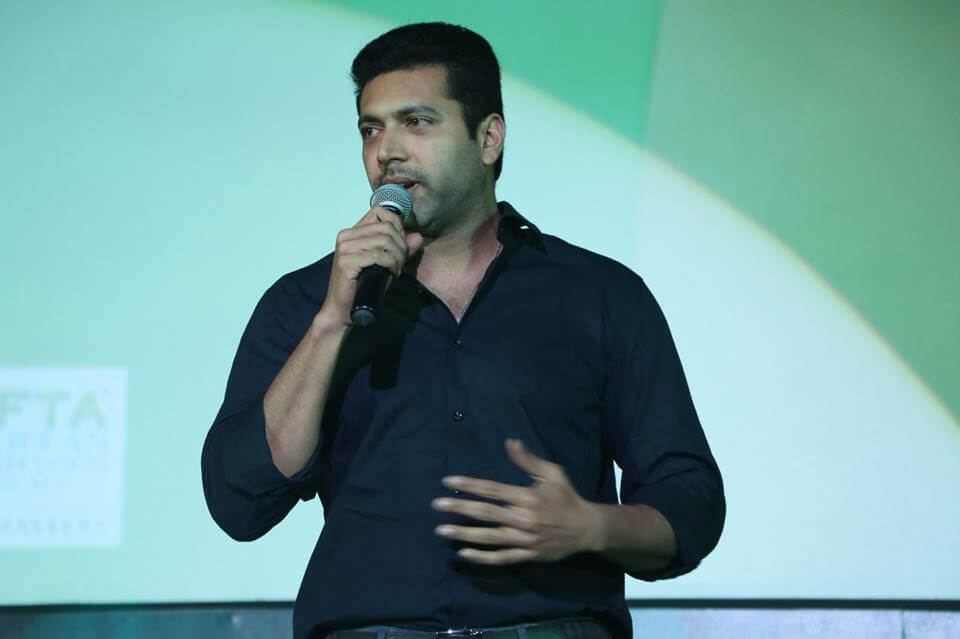 Jayam Ravi is an Indian movie actor, who predominantly works in Tamil film industry. He made his debut movie Bava Bavamaridi as a child artist in the year 1993 and he made his debut movie Jayam in the lead role which is a Blockbuster film which is directed by Mohan Raja in the year 2003. He recently worked for the movie Adanga Maru as Karthik Thangavel. Check out below for Jayam Ravi Age, Height, Weight, Movies List, Family, Images and more.

Jayam Ravi was born on 10 September 1980, in Tirumangalam, Madurai, Tamil Nadu. Jayam Ravi family is now residing in Chennai, Tamil Nadu, India. His father name is Mohan who is a movie editor and his mother name is Varalakshmi Mohan. Then he has two siblings a brother named Mohan Raja who is a film director and a sister Roja who is a dentist. He did his schooling in Jawahar Vidyalaya, Ashok Nagar, Chennai and he did his graduation in Loyola College, Chennai. He is also a trained Bharatnatyam dancer he trained under Bharatnatyam dancer Nalini Balakrishnan and he did his arangetram at the age of 12. Once after his graduation, he decided to get into the acting career so he joined in Kishore Namit Kapur Institute in Mumbai and started to learn acting. Then he trained movie stunt from the stunt master power Pandian and worked as an assistant director to Suresh Krishna for the movie Aalavandhan starring Kamal Hassan in the year 2001. Jayam Ravi wife name is Aarti who is the daughter of noted television producer Sujatha Vijayakumar and they both got married on 4 June 2009. They have two sons named Aarav who born on 29 June 2010 and Ayaan who born on August 10, 2014. Aarav has played a role in his movie Tik Tik Tik.

Jayam Ravi started his acting career from his childhood he acted in two Telugu films titled Bava Bavamand and Palnati Pourusham and these movies were produced by his father. Then he made his debut movie Jayam which is an action-masala film and the movie is directed by his brother Mohan Raja and produced by his father Mohan in the year 2003. Then he featured in the movie M. Kumaran Son Of Mahalakshmi it is a remake of Telugu movie Amma Nanna O Tamila Ammayi in this movie he featured with Asin Thottumkal and for this movie, he received the  Tamil Nadu State Film Special Award for Best Film and he fetched the award as Tamil Nadu State Film Award for Best Actor. Then in the following years, he featured in the movies like Dass (2005), Mazhai, Idhaya Thirudan along with Kamna Jethmalani, Unnakum Ennakum along with Trisha, Santosh Subramaniam with Genelia, Miruthan with Lakshmi Menon, and more. His recent movie Tik Tik Tik has received the critical acclaim among the people and the movie has received the biggest box office collection which is directed by Shakti Soundar Raja.