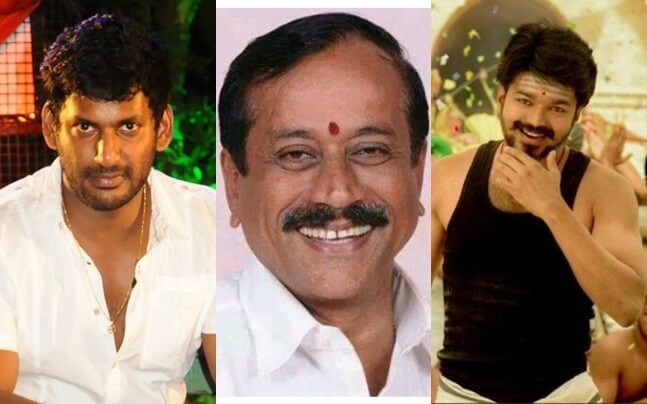 IT Raid on VFF: The Goods and Services Tax intelligence team searched actor Vishal’s production office at Vadapalani in Chennai for “not paying” Rs 51 lakh collected as TDS and not deposited into the government account. The search took place a day after a vicious quarrel about the state BJP leader H Raja for allegedly watching a pirated version of the movie Mersal.

H Raja, a national secretary of the party, state president Tamilisai Soundarajan and Union Minister Pon Radhakrishnan, have been obliging that the “incorrect references” should be deleted from the Movie. They had slammed Mersal, starring Tamil superstar Vijay, for what they described as “false criticism” of central government initiatives such as GST and Digital India.

Vishal Film Factory has assured the I-T department that the pending TDS would be deposited in two to three instalments. The department has issued a warrant to the company to appear on Friday.

Vishal said after he heard about the wing’s arrival,

“I came to know that TDS officials visited my premises. I was at a shooting. There was no one in my office then,”

“It was a routine assessment conducted by the TDS wing. An official named Venkatraman visited Vishal’s office.” “I-T department’s TDS wing officials visited Vishal Productions office to verify non-deposit of TDS to the tune of Rs 51 lakh which the company had collected by deduction but has so far not deposited in the government account,”

Senior I-T officials reported that the search was conducted by four officials to investigate that charges in the production house, Vishal Film Factory, had deducted tax at source of payment worth Rs 51 lakh made to various clients but supposedly failed to deposit the amount with the government. He said,

“When our team visited his office address after 3 pm, Vishal was not present. The inquiry continued for about three hours as the books of accounts were not readily available. Vishal spoke to our officers over the phone and agreed that he would make the payment in two instalments. He has been served summons to appear before the I-T department on Friday,”

SIFCC is the top organisation of studio owners, producers, distributors and exhibitors association from all the southern states.