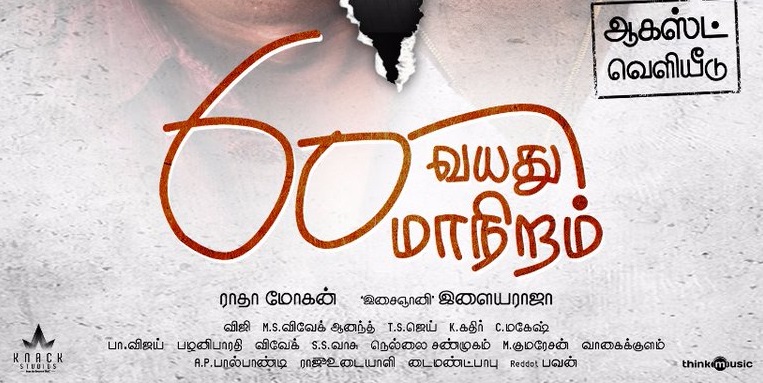 60 Vayadu Maaniram is a Tamil movie directed by Radha Mohan. Produced by Kalaipuli S Thanu, 60 Vayadu Maaniram is said to be a remake of Kannada film “Godhi Banna Sadharana Mykattu.” 60 Vayadu Maaniram features Vikram Prabhu in the lead role along with Prakash Raj and Samuthirakani. The movie also features Indhuja, Kumaravel, Sharath, Mathumitha, Mohanram, Arul Jothi and Bharath Reddy in supporting roles. Isaignani Ilaiyaraaja has composed the music for this movie and M. S. Vivekanand has handled the cinematography work. T. S. Jai is the editor and Viji has penned the dialogues for this movie. Check out below for 60 Vayadu Maaniram Tamil Movie (2018), Cast, Songs, Teaser, Trailer, Review & more.

The story of the film is about a father and son’s relationship. Prakash Raj has stepped into the shoes of Ananth Nag, while Vikram Prabhu will be seen in Rakshit Shetty’s character in the Tamil version of Godhi Banna Sadharana Mykattu. The good content backed by solid performances from the cast had won the hearts of the Tamil audience.