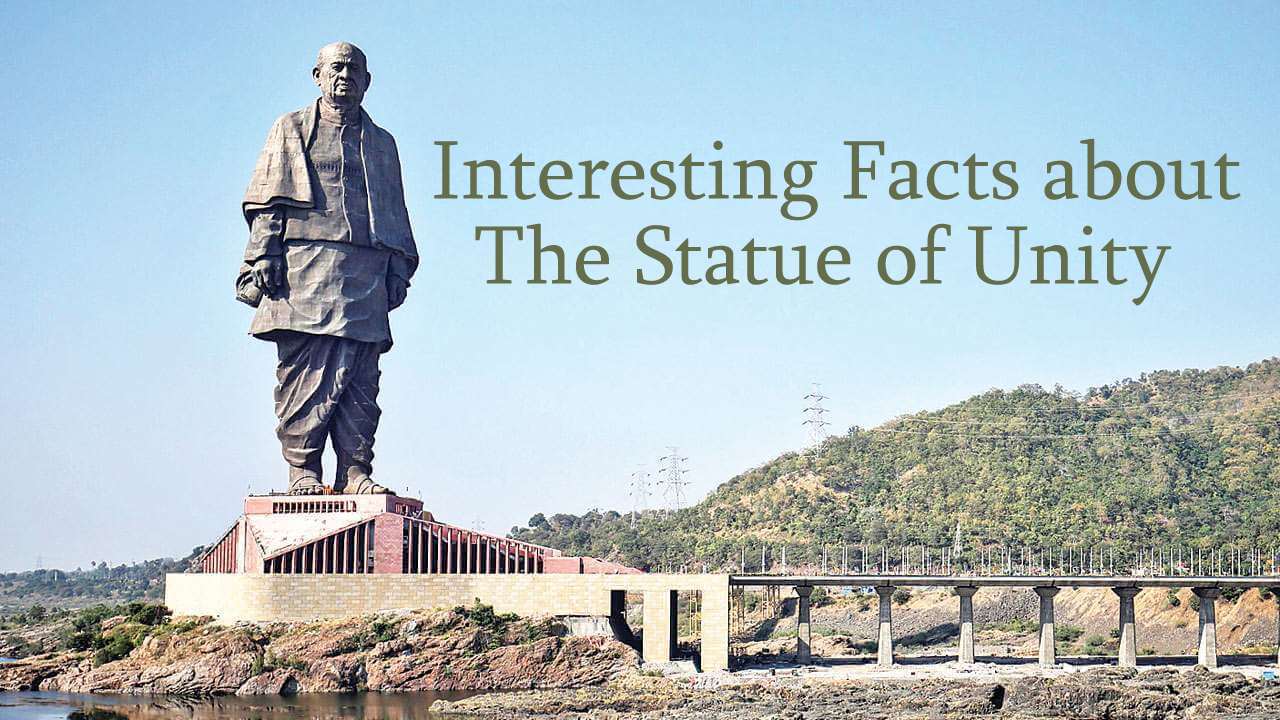 The Statue of Unity has constructed to honour the great leader, freedom fighter, and India’s first home minister Sardar Vallabhbhai Patel who is also popularly known as the “Iron Man of India”. The statue was opened by the Prime Minister Narendra Modi on marking the 143rd birth anniversary (31 October 2018) of Vallabhbhai Patel. The statue was built on the river island named Sadhu Bet near the Narmada dam in Kevadiya colony which is located between the Satpura and the Vindhya mountain ranges. The Statue of Unity is the tallest statue in the world, and the height is about 182 meters (597 ft). The Indian government has spent around Rs.3,000 crore to construct the Statue of Unity, and the PM Modi has dedicated the statue for the nation.

RELATED 20 Interesting Facts About Taj Mahal That You Should Know

Amazing Facts about Statue of Unity

As it is the tallest statue in the world, it has many interesting facts to know. In this guide, we described some known and unknown facts about Statue of Unity.

1. Statue of Unity is taller than all other statues in the world. It is 23 meters taller than China’s Spring Temple Buddha statue and nearly doubles the height of Statue of Liberty located in the United States of America.

2. The statue has the capability to withstand the wind speed up to the 60 m/s, and an earthquake measuring up to 6.5 Richter Scale.

3. The statue has constructed within the duration of three & half years with 3000 workers by the Larsen & Toubro (L&T) infrastructure company.

5. In 2011, Modi set up some special purpose vehicles called The Sardar Vallabhbhai Patel Rashtriya Ekta Trust to take 129 tonnes of used iron implements from 100 million farmers around 169,000 villages in all states to build the base of the statue in the ‘Loha’ campaign.

6. The viewing gallery of this statue is located at a height of 153 meters and can accommodate approximately 200 peoples at a time. It gives you an immense view of the Sardar Sarovar Dam.

7. This statue is made up of two semi-joined composite concrete cylindrical cores which are surrounded by the structural steel frame to support the exterior Bronze cladding. They have used nearly 5700 Mton of structural steel and 18500 Mton of reinforcement bars to construct the statue.

8. The Statue of Unity has been built as a three-layered structure. The innermost layer with the two towers of 127 meters high is made up of reinforced cement concrete (RCC). The second layer is made by steel, and the third layer is an 8 mm bronze cladding that covers the surface of the statue.

9. The reinforced cement concrete towers located at Patel’s dhoti-clad legs has two lifts. Each lift has the capacity to carry about 26 people within half a minute or more to the top.

10. The maintenance cost of the statue is around Rs 12 lakh per day. The entry ticket fee for an adult costs Rs.120 and to view the gallery they charge Rs. 350 per head.

11. According to the media report, this statue has made an impact on the tribals of that region. The government took the lands of those tribals. The report says that this statue has harmfully affected nearly 75,000 people of that location.

12. The tribals of the area have also asked the government to stop the project, or they will drown themselves into the Narmadha river. Nearly 22 villagers have also written a direct letter to PM Modi to stop this project.

14. Along with the statue, they have constructed five related sites that include a food court, ticket counter, pathway, and 52 rooms hold three-star hotel named Shrestha Bharat Bhavan for visitors.

15. It also has a unique museum to show the audio-visual of the life history of Sardar Vallabhbai Patel.