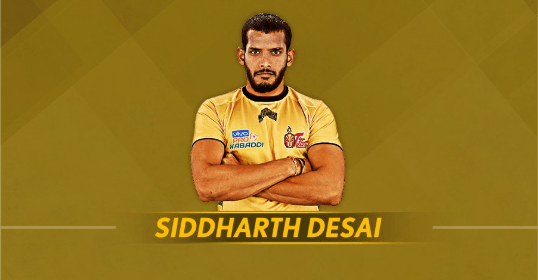 Telugu Titans are one of the most competitive sides in the Pro Kabaddi league. The Telugu Titans squad has star players like Siddharth Sirish Desai, Vishal Bhardwaj, Suraj Desai, Farhad Rahimi Milaghardan and Rajnish. While Siddharth Desai gaining points on raids, defenders showcase their talent by tackling the opponents. In the previous Telugu Titans Match, the defenders were in full form but unfortunately, the match ended in a tie.

After playing 5 matches for TT, Siddharth Desai has scored 30 points which are around 30% of total points gained by Telugu Titans for 5 matches. With these records, there is no doubt that Siddharth Desai will shine for Telugu team in this seasons. Currently, he is staying on 10th position with 30 points scored in 5 matched among all players in the season.

The team is yet to showcase their real talent. As of now, only Siddharth Desai has put in maximum efforts to score points for the team. The captain “Abozar Mohajermighani” has scored 10 points for the team in 5 matches (9 points by tackling and 1 point through riding). Suraj Desai played 3 matches and scored 22 points for the team. He scored 18 points in a single match against Delhi team which was highly appreciated by people who are watching.

Rajnish, raider of Telugu, has scored 12 points in 3 matches. The all-rounder Farhad Rahimi Milaghardan has scored 12 points in his 5 matches (7 from tackling and 5 from riding). Other players have less than 10 points in the matches they had played. As of now, only 5 matches are completed and there is no doubt that TT team players will emerge out scoring points for their team in the upcoming matches.

The match against UP Yodha was also very interesting. When both teams were 19 points each, Siddharth Desai goes for a Do or Die ride. The Titans scored a point but unfortunately, the team manager started celebrating before the whistle and walks on the mat allowing umpires to allot a point for UP Yodha. This situation made the match tie. The Titans were very unfortunate and they are yet to win a match in this tournament.

How to Find and Chat with Snapchat Girls Online