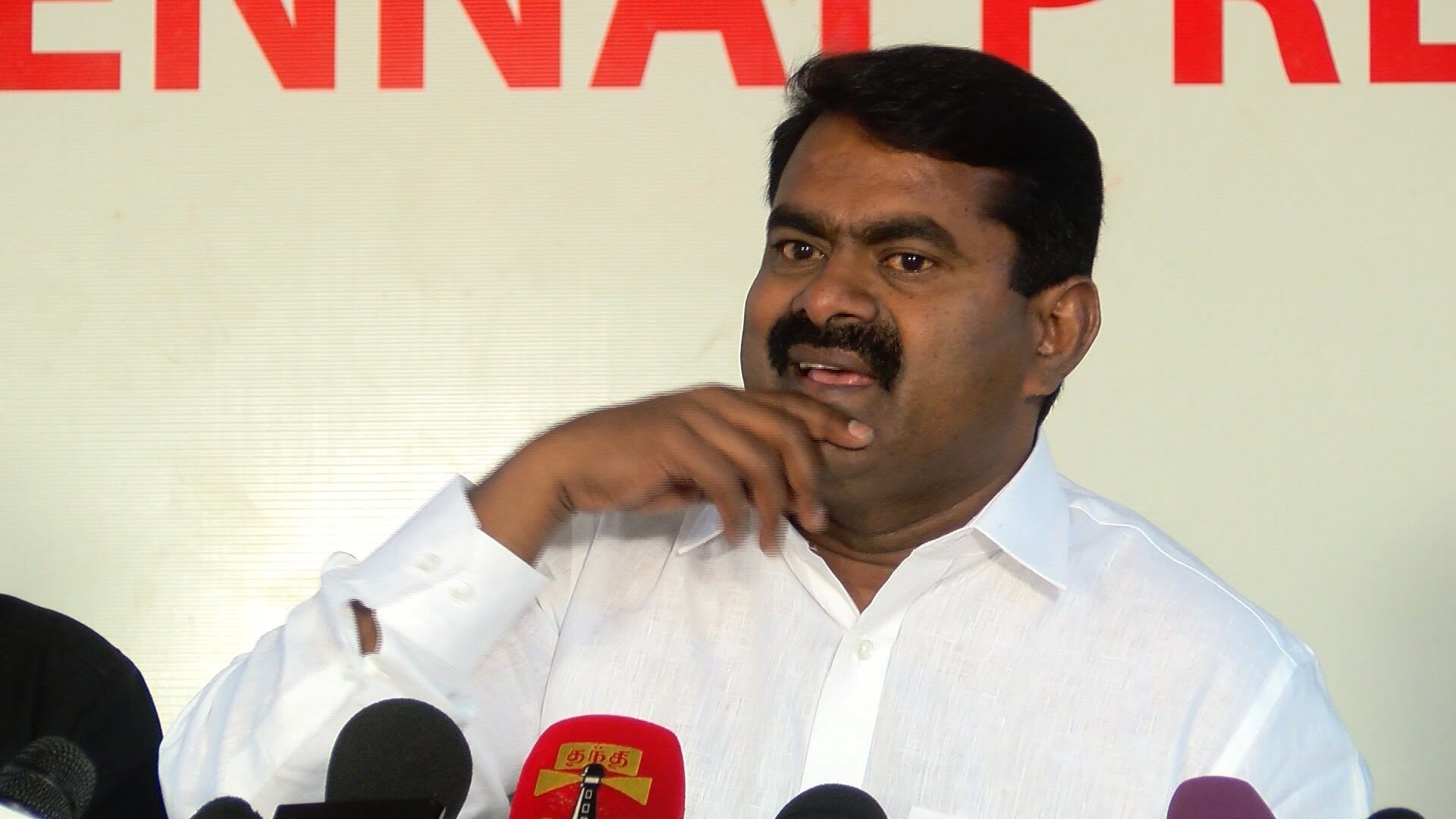 Senthamizhan Seeman (Sebastian Seeman), better known mononymously as Seeman, is an Indian film director and actor who works in Tamil Cinema. He is a Tamil politician and the chief coordinator of the political party, Naam Tamilar Katchi in Tamil Nadu. He is a Tamil activist, orator, and supporter of the Sri Lankan Tamil people and the Liberation Tigers of Tamil Eelam (LTTE) leader Prabhakaran.

In Tamil Nadu State Assembly election 2021, NTK candidates have scored more than 5% votes in 159 constituencies. It secured the third position in several constituencies across the state.

Seeman was born on 8 November 1966 in Aranaiyur Village, Sivagangai District, Tamil Nadu, India. He was born to Mr Senthamizhan and Mrs Annammal Senthamizhan in a Tamil family. In 2013, he married Kayalvizhi, a daughter of K. Kalimuthu (former Speaker of Tamil Nadu Legislative Assembly from AIADMK party) in the presence of Pazha Nedumaran and others. The ceremony was held at the YMCA grounds, Nandanam, Chennai. The couple blessed with the baby boy on 11 January 2019. On 13 May 2021, Seeman father Senthamizhan dead due to health issues.

He took up film direction as a career in his initial stage after being inspired by the films of his mentor, Bharathi Raja, and Manivannan. Seeman started his career by directing Panchalankurichi, a village action film starring Prabhu and Madhubala. In 2006, he came back with a successful film Thambi with actor Madhavan.

Seeman turned actor with the film Pori where he played the role of a Malaysian Businessman. The same year he directed the love story Vaazhthugal again with Madhavan and Bhavana, with every single word used in the movie being written in pure Tamil. Seeman played a lead role in Director and his mentor Manivannan’s Nagaraja Cholan MA, MLA.

Seeman was the Chief Coordinator of the organization “Naam Thamizhar Iyakkam” which turned as a political party “Naam Thamizhar Katchi” in the year 2010. Tamil Nadu Government prisoned him for supporting Sri Lankan Tamil people and the Liberation Tigers of Tamil Eelam and for addressing Velupillai Prabhakaran as leader of all Tamil’s in his hardline speeches.

He believes that Velupillai Prabhakaran is the national leader of all Tamils and the icon for Tamil liberation. He was arrested twice without trial under the draconian National Security Act by the ruling DMK-Congress government, first for speaking in favor of the LTTE and again for protesting the killing of a Tamil fisherman by the Sri Lankan Navy.

In 2014 parliamentary elections, Seeman has stated that the Naam Tamilar Katchi would campaign for the defeat of the candidates fielded by the DMDK, Congress, and BJP where they are contesting. The three main parties lost all the constituencies they contested in Tamil Nadu except BJP who win their only seat in Kanniyakumari.

Some of the main agenda of ‘Naam Thamizhar Katchi’ is to free “Tamil Eelam” from Sri Lanka which is Ethnic Tamils motherland, only Tamils should rule Tamil Nadu and to spread the importance of Tamil language only by which unity of Tamil People is possible.

Check out the latest photos of Seeman,