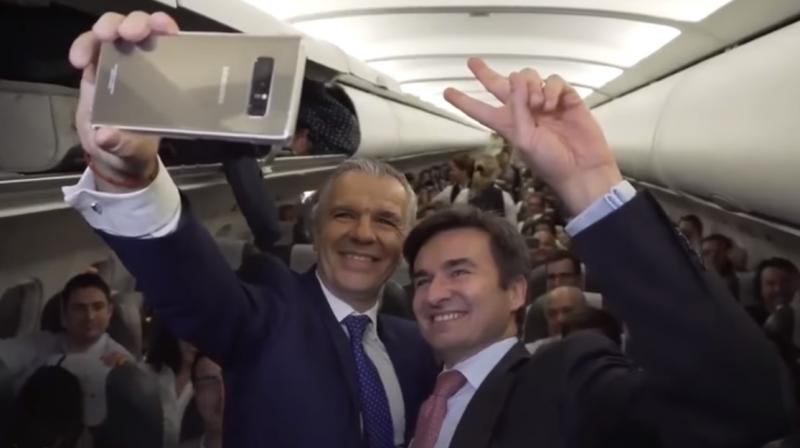 A Year ago Samsung Note 7 was considered unsafe as there was a threat of blast. So the Note 7 was banned to be carried while flying. As the company launched Note 8 early this year, the people considered it as a failure model and had the fear to buy it. In order to prove them wrong, Samsung used an unexpected marketing strategy to promote Note 8 as safer and reliable model than the Note 7. Samsung gifts Note 8 for around 200 passengers in the Spain flight as a Promotional Move.

Samsung Gifts Note 8 for Passengers in a plane

Samsung Note 7 was released with a huge expectation. As expected the mobile’s sales were higher at the time of release. Later a defect was identified in the mobile that makes it burst when charging. It was considered as a huge threat as it causes damage physically and also a loss of properties as well. Samsung Galaxy Note 7 was banned to be carried in Flight as the blast might cause the fire in the aircraft. Many countries banned to sell Samsung Galaxy Note 7. Samsung then asked the consumers to return Galaxy 7.

Samsung upgraded the phone and released Galaxy Note 8 earlier this year. But the fear that left over by the Note 7 was still there which made Galaxy Note 8 sales to go down. Samsung wanted to prove the world that Note 8 is safer and the defect was rectified in Note 8. Hence they considered going for a new marketing strategy which will make people understand that Note 8 is safer and it doesn’t burst like Note 7.

Samsung Spain to break the ice planned a promotional move. As a part of this promotional move, Samsung Spain gave away 200 Samsung Galaxy Note 8 as a gift for 200 passengers in the  Iberia’s flight “IB514” as a surprise. The phone contained a note, “A year ago we asked you to turn it off, we welcome you today on board” which was so special. This strong marketing strategy is to prove the world that Note 8 is safer to be taken on board.