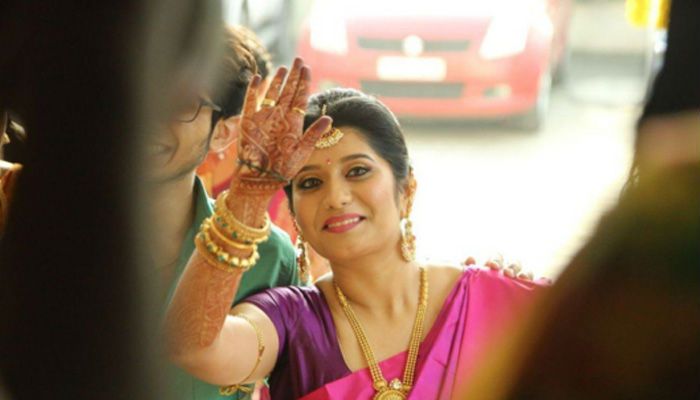 Priyanka Deshpande is a popular television anchor associated with Vijay TV. She is well known as ‘Vijay TV Priyanka’ in Tamilnadu who has been working with Star Vijay Television as a lead leading female anchor. He has hosted for more popular shows such as Airtel Super Singer Junior, Kalakka Povathu Yaaru, Kings of Comedy Juniors, among others. She began her professional career with ZEE TV Tamil Television before she shifted to Vijay TV. Check out below for Priyanka Deshpande Wiki, Biography, Age, Husband, TV Shows, Images and More.

Priyanka Deshpande was born on 28 April 1990 in Karnataka, India. She is a Maharashtra origin, born and brought up in Karnataka. She did her schooling at St Antony School, Hubballi, Karnataka and graduated in Viscom at Ethiraj College, Chennai, Tamil Nadu. She has a brother named Rohit Deshpande. In 2016, Priyanka got married to Praveen who also works in Vijay TV as assistant director of Airtel Super Singer.

She started her anchoring career with ZEE TV and worked for few years. Then she shifted to Sun Network and joined Sun Music as VJ, also being part of anchoring special festival programs in Sun TV. She also anchored shows on Chutti TV. Her favourite show is “Mami’s day out” on Sun music TV made her familiar.  Later, she moved to Vijay Television and working till date.

The South Indian’s most popular Vijay Television offered her an opportunity to host several shows and made her a celebrity anchor. She started with a show, Cinema Kaaram Coffee along with Ma Ka Pa Anand. The show is all about latest Tamil movie news updates. After her performance was impressive in the show, Channel has given a chance to host another popular show Olli Belly. She became popular and improved her skills after working in Vijay Television. She then upgraded her to anchor Airtel Super Singer Junior – Season 4. The long season of Super Singer is hosted by Ma Ka Pa Anand, Bhavana and Priyanka. Along with Ma Ka Pa Anand, she continues to host Airtel Super Singer Season 5 (2015-16).