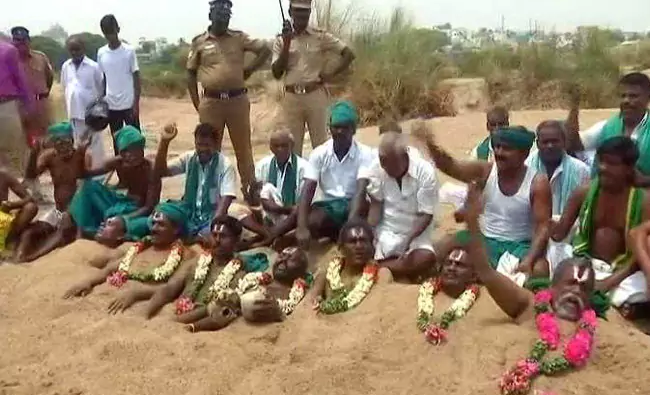 Cauvery Issue: Tamil Nadu farmers have taken to the streets yet again over the Cauvery issue. Members of the Desiya Thenninthiya Nathigal Inaippu Vivasayigal Sangam (National South Indian River Interlinking Agriculturist Association), buried themselves in the sand up to their torsos on the Cauvery riverbed in Trichy demanding that the central government constitute a Cauvery management board immediately. A total of 25 members of the association participated in the protest. They wore garlands and posed as dead bodies.

Farmers leader Ayyakannu, known for leading the famous and unique protests by Tamil Nadu farmers in the national capital, was also present at the protests. The farmers were later evicted by the police.

P.R. Pandian, a leader of farmers, argues that only with the Southwest Monsoon rainfall, agriculturists can do farming operations intensely and the Northeast Monsoon is only of “complementary and supplementary value.” ANI Report tweets,

Tamil Nadu: Farmers in Trichy who were protesting by partially burying themselves in sand on banks of Cauvery river demanding the formation of #CauveryManagementBoard , have been evicted by Police pic.twitter.com/HaZh9MGGnA

The protesters alleged that the Central government had been acting against the interest of the farmers in Tamil Nadu. They demanded that the Centre honour the Supreme Court’s order by constituting the Cauvery management board immediately.

Since last week, protests, fasts, and demonstration are being held in the state against the Centre’s failure to set up the CMB. The Opposition party DMK alleges that the ruling party in Tamil Nadu has failed to exert pressure on the central government to constitute the CMB.