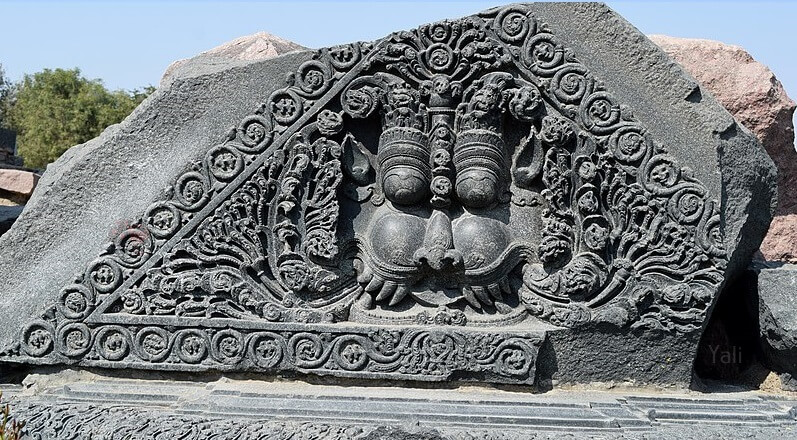 Yali is a famous mythological creature seen in temples, forts, and some traditional buildings.It is also believed that it is an extinct species like dinoceros, but there is no scientific proof for that. People can watch Yali statues in several ancient south Indian temples. There are six types of Yalis, Magarayali, Kajayali, Moshikayali, Ashwayali, Swanayali and Simmayali. Some people believe that the Yali statue in the temple works as a security guard for the temple. It is also believed that the mysterious creature was lived Lemuria continent.

According to sources, this mythical creature’s data was found in an ancient Tamil poem Natrinai. It describes Yali as a carnivore creature and it is bigger and stronger than the elephant. How much bigger is that it have enough capacity to move an elephant with its nails.

Yali is an important part of the ancient South Indian temple’s pillar architecture. Ranganatha temple, Meenakshi Temple, Vittala temple, Bhoganandishvara temple, Tanjore big temple etc., are some of the Indian temples where we can visit Yali statue. Along with south India, we can also explore Yali sculptures in Sri Lankan Hindu temples. The height of the sculpture is almost 10 feet. Ancient Indians mostly uses rock stones as a raw material to sculpt Yali. Sometimes they also use wooden material. We can also witness the presence of Yali in ancient Tamil’s musical instrument named Yaazh.

Here are some pictures of Yali,