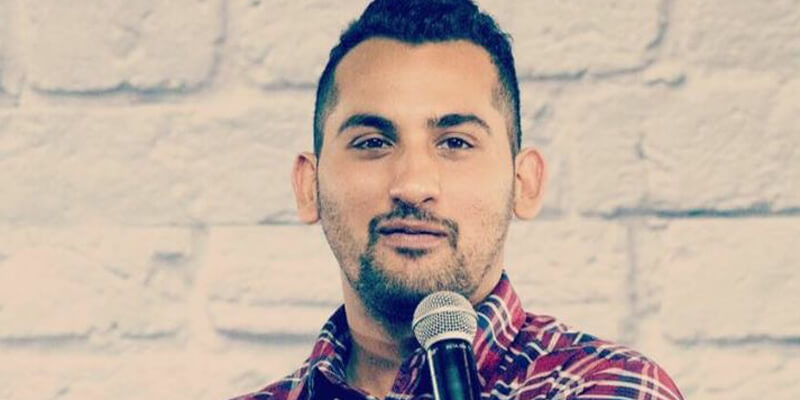 Danish Sait is one of the excellent Indian Radio Host, TV Presenter, Actor, and Writer. He has done over 22 million plays and still counting. Danish Sait prank calls are famous among the people and his show 8 alter egos has reached the people all across the world. Moreover, he is not only a voice artist but has appeared in digital campaigns for Taxi4Sure and Royal Challengers Bangalore. Danish Sait has also appeared as a TV Presenter for The Pro Kabaddi League season 1 and 2. Check out below for Danish Sait Wiki, Biography, Age, Prank Calls, Images.

Danish Sait was born on 1 July 1987 in Bangalore, India. Her father name is Zakariah Sait and her mother’s name is Yasmin Sait. He has a sister Kubra Sait, a model and TV Host. He did his schooling at Frank Anthony Public School, Bangalore, India and did his graduation in Visual communication at Bharathiar University, Coimbatore, India.

Danish Sait has started his career in the year 2009 as Radio Jockey in Bahrain for 104.2 FM. From there he shifted to 105.4 Radio spice in Dubai, United Arab Emirates. Moreover, he owns and manages one of India’s biggest SoundCloud Account with nearly 22 million plays, prank calls, TV presentations and 8 alter egos. Danish has hosted The Pro Kabaddi League, The ICC Cricket World Cup 2015 and more. He is multilingual and able to speak Kannada, Hindi Telugu, Tamil, Malayalam, and English.

Check out the latest photos of Danish Sait,