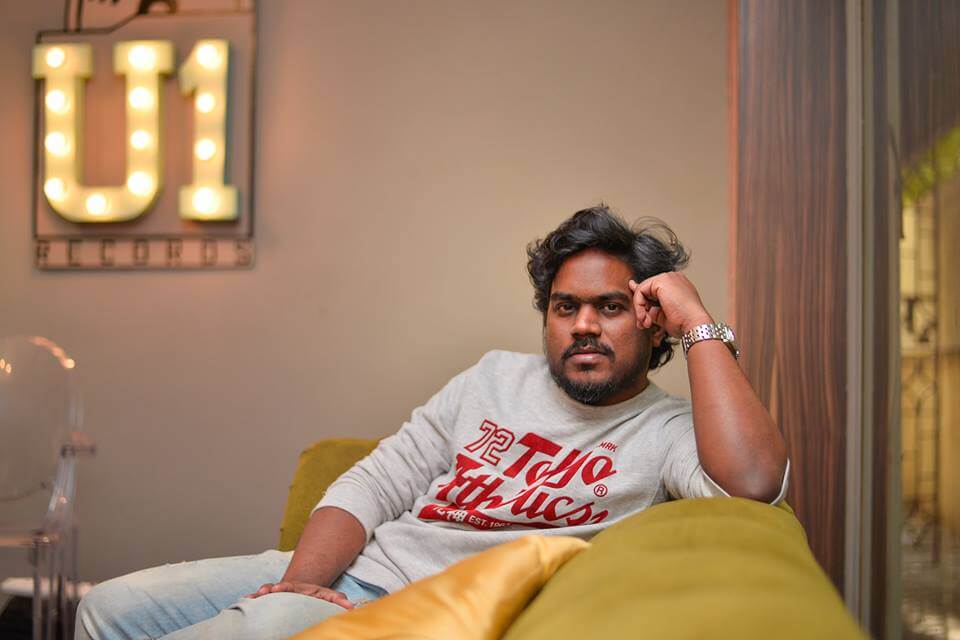 Yuvan Shankar Raja is an Indian movie singer, composer, songwriter, film score and soundtrack composer, the lyricist who predominantly works in Tamil film industry. He made his debut movie Aravindan as a composer in the year 1997. As a playback singer, he made his debut songs “Something Something“, “Iravu Nilavu”, “Motta Maadi“, “Vaanam Namakku”, “Anjali Anjali” for the movie Anjali which is composed by Ilaiyaraaja who is the father of Yuvan Shankar Raja. Check out below for Yuvan Shankar Raja Wiki, Biography, Age, Songs List, Movies, Family, Images and more.

Yuvan Shankar Raja was born on 31 August 1979 in Pannaipuram, Theni, Tamil Nadu. Yuvan Shankar Raja family is now residing in Chennai, Tamil Nadu, India. His father name is Ilaiyaraaja who is the Maestro in Tamil music industry and his mother name is Jeeva. He has an elder brother named Karthik Raja who is a music composer in Tamil Music Industry and a sister named Bhavatharini who is a playback singer. He did his schooling in St. Bede’s Anglo Indian Higher Secondary School, Chennai and he did his graduation in Trinity College in London, UK. Gangai Amaran who is a film director and film composer and R. D. Bhaskar who are his uncles and Venkat Prabhu, Premgi Amaren and Parthi Bhaskar are his cousins who are working in Tamil film industry. He started learning music from the Jacob Master and he attended piano classes at “Musee Musical” in Chennai.

He was admired by his father’s work and other composers like S. D. Burman, R. D. Burman, M. S. Viswanathan and Naushad Ali and the voices of singers Lata Mangeshkar, Asha Bhosle, P. B. Sreenivas, S. P. Balasubrahmanyam, and P. Susheela. As he is the son of Maestro Ilaiyaraaja he started his music career at the age of 16, as a composer form the movie Aravindhan. After the few struggles in his initial period, he got a breakthrough from the movie Thulluvadho Ilamai soundtrack in the year 2001, from that movie he evolved as one of the most sought-after composers in Tamil Cinema in the mid-2000s. Moreover, the talent of Yuvan was compared with Oscar winner A.R.Rahman, with that, his notable works and loyal fanbase earned him an honorific name that is Youth Iconso called as Raja. In the year 2001, he released his three albums first being Thulluvadho Ilamai, collaborating with Selvaraghavan and his brother Dhanush appeared in this movie in the lead role.  Then he made his movie April Maadhathil, Kadhal Samrajyam, Mounam Pesiyadhe which is debutant movie of director Ameer in the year 2002.

Later he also appeared in Selvaraghavan’s first independent directorial, the drama-thriller film Kaadhal Kondein in 2003. He not only worked for Tamil film industry he also worked for other languages like Telugu, Kannada, Malayalam and Hindi as well. In the 15 years of time in the music industry, he worked more than 100 films. He recently composed his 125th movie Irumbu Thirai featured by Vishal and Arjun. He is considered as a versatile composer because he uses western music elements with that he introduced the Hip-hop to the Tamil film and music industry and having started the “era of remixes” in Tamil Nadu. Moreover, he has won two Filmfare award for the Best Music Director Award in 2004 for the movie  7G Rainbow Colony. In 2009 he won the Filmfare Special Award – South for his music in the Telugu movie Oy!. Then he also received six nominations for Filmfare Awards, two Tamil Nadu State Film Award in 2006 and 2010 and the Cyprus International Film Festival Award in 2006 for Raam, who is the only Indian composer to win it. In the year 2015, he created his music label, U1 Records and in 2017 he began his own film production studio, YSR Films where his first movie is Pyaar Prema Kaadhal.

Yuvan Shankar Raja married his longtime girlfriend Sujaya Chandran on 21 March 2005, at the Mayor Sri Ramanathan Chettiyar Hall in Chennai. He met her in 2002 in the cultural program in London as a fan both fell in love and they made a secret registered marriage in September 2003 in London. Then they both got divorced with mutual consent on February 2008. Then on 1 September 2011, he married Shilpa at the Tirumala Venkateswara Temple, Tirupati in Andhra Pradesh. She is a B. Pharm graduate from Australia and she got divorced with mutual consent. Yuvan Shankar Raja wife name is Zafroon Nizar who is his third wife, once after he got married he converted to Muslim and rechristened himself as Abdul Khaliq. They both got married on 1 January 2015 then this couple has a baby girl was born on 7 April 2016.