Yaaradi Nee Mohini Serial is a 2017 Indian Tamil Language Thriller soap opera starring Sanjeev, Fathima Babu, Nachathira, and Chaitra Reddy. It was premiered on 24 April 2017 on Zee Tamil and is aired every Monday to Friday at 8:30 PM. Thirumathi Selvam and Maanada Mayilada fame Sanjeev was selected to portray the lead role of Mutharasan and after some episodes, Shreekumar has replaced him. Actress Nachathira was selected to play the lead role opposite Vennila in the serial. Actress Chaitra Reddy was selected to portray the second lead role and the main antagonist of Swetha. Famous actress Fathima Babu was chosen for the serial as the main antagonist of Nilambari and through this, Fathima Babu makes her TV serial comeback after 10 years break. Yamuna Chinnadurai was selected to play as Mutharasan’s wife who turns into a ghost. It is claimed that the show is the second biggest budgeted TV series on South India television after series Nandini. Check out below for Yaaradi Nee Mohini Serial cast & crew, plot actors, awards, and more. 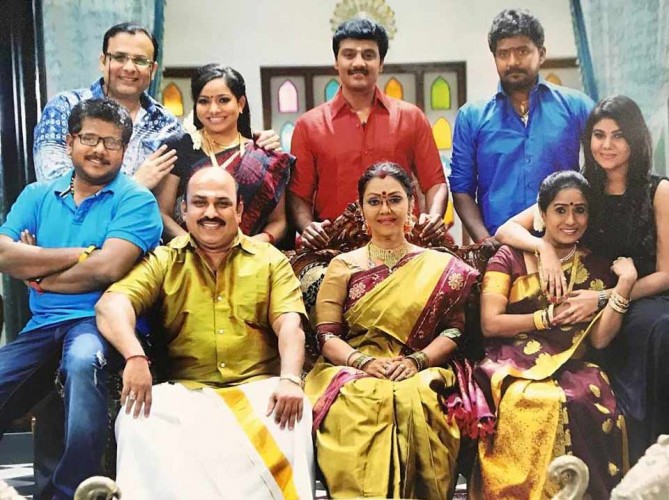 The character Mutharasan (Sanjeev) is the grandson of a rich landlord. After the demise of his mother, his father marries Nilambari (Fathima Babu). In spite of Mutharasan having a lot of faith and respect towards Nilambari, she tries to kill him to acquire his father’s property for her children. Meanwhile, Vennila (Nachathira) is his cousin, who loves him a lot and wants to marry him. But, a clause in the will forbids her, as it requires the signature of the Mutharasan’s wife. Nilambari brings Swetha (Chaithra) her niece to get married to Muthu and to make her side strong. Meanwhile, Chitra’s (Mutharasan’s dead wife) ghost is now out to destroy Nilambari’s evil plans, which was later found by Nilambari and gang. Swetha then plans and controls the power of Chitra’s spirit. Also, she kills Vennilla mother and grandmother. Finally, Swetha and Muthuarasan ‘s marriage is fixed. Unexpectedly, Swetha’s ex-husband comes to stop the marriage. Swetha comes to know this and kills Muthuarasan’s father leaving Vennila lonely as everyone who supported her were dead. Herecomes a surprising character Kalai (Vinitha), wife of Maruthu (Nilambari’s first son) who finds the power of Chitra and stands along with Vennila. Now the story travels with more expectation as Chitra is free from control and Chitra’s mother comes into picture to reveal the truth to Muthuarasan.