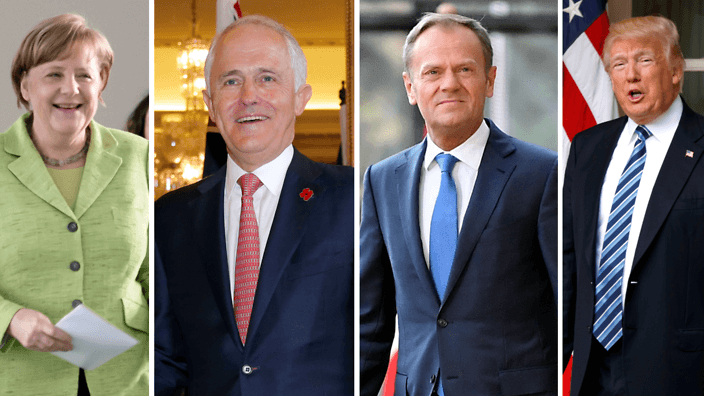 Pro-EU centrist Mr. Emmanuel Marcon rushed to his victory in French Presidential election that held on Sunday, completely winning his far- right competitor Martine Le Pen in a run-off vote. Here the collection of comments, by the world leaders congratulations for Macron’s Victory and other political heavyweights on Marcorn’s election victory.

US President Donald Trump addressed that congrats for Emmanuel Macron to his big success as the President of France. I look very much froth to working with him, he said on his Twitter page.

Mr. Chancellor Angela Merkel says Congratulations to Macron; your success is the success of a strong and united Europe and for  French- German relationship.

Chinese President Xi Jinping on Monday he congratulated France’s centrist politician Emmanuel Macron on his presidential election success, saying to their countries share a ” responsibility to peace and development in the world.” China stated that they are ready to work with France to move the strategic Sino- French cooperation to a higher level,” Mr. Xi said in his celebratory note, according to the Chinese Foreign Ministery.

Mr. Xi recollected that now France was the first Western power to establish strategic relations with Communist-ruled like China in 1964.

President-elect Macron was warmly congratulated by the Prime Minister for his election victory. France is our closest allies, and we look ahead to working with the new President on a broad range of shared priorities said by Downing Street spokesman.

Prime Minister Theresa may also consider  Brexit wit Macron, says that UK needs a strong relationship with a secure and flourishing EU once we leave, the Spokesman added in his address.

Europian Commission President Jean -Claude Juncker, he wrote on his Twitter page, happy that French selected a Europian Future. EU Council President Donald Tusk also presents his congratulations; he says that French had chosen liberty, fraternity, and equality then he said no the severity fake news.

We received a vote of faith from France in the Europian Union, says Europian Parliment President Antonio Tajani.

Japanese Prime Minister Shinzo Abe says that the victory of President-elect Macron is a typical success against inward-looking and protectionist moves and shows a wish of faith in EU.

The Canadian Prime Minister Justin Trudeau said he wanted to work mutually with Macron on a” progressive plan” to promote international security, develop collaboration in science and technology, and built good, middle-class job on both sides of Atlantic.

Prime Minister Malcolm Turnball send his congratulation for Macron’s victory; he texted back by telling he was looking forward to working together. He highlighted the partnership between French and Australian soldiers during World War I, he added the point we worked in freedom’s belief for centuries, and we are in freedom’s cause in the Middle East today. So we need to have a good relationship to do to make the ties between France and Australia stronger still.

The Prime Minister Alexis Tspiras says Congratulations for Macron’s Victory, Macron’s victory is an inspiration for France and Europe, and he addressed we will surely work in close cooperation.

Congratulations to the new president of France to Macron, Let us serve inFrance and Spain for a stable, Flourishing and more unified Europe, Prime Minister Mariano Rajoy addressed in his tweet.

Irish Prime Minister Enda Kenny said that he is happy to see the leader with real ambition for Europe has won this election. He says that there is lots of work waiting for all of us in Europe, in the challenging situation, not limited on Brexit.

Bill English, the Prime Minister, welcomed Macron’s victory, as good for political resistant, this result I think that lot of people will see as creating a clear track for France.