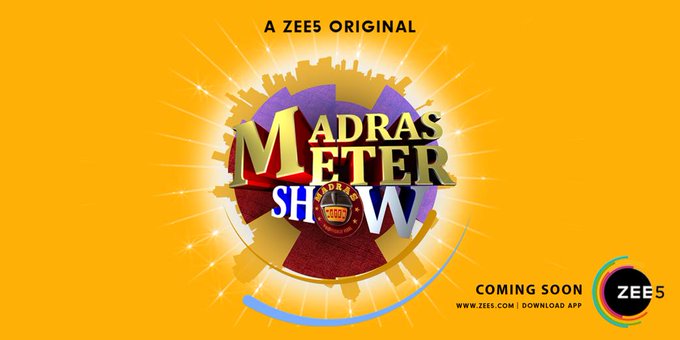 Madras Meter is one of the most subscribed YouTube channels in India providing clean and unlimited entertainment. The team is trying hard in providing fresh, creative, innovative and engaging content that captures the absolute essence of Chennai lifestyle. ZEE5 is a video on demand platform that successfully provides contents in 12 languages. Having said that, ZEE5 has always been supportive of new and young talents. Now, ZEE5 has picked up Madras Meter Show to create engaging content in 2019.

The Madras Meter Show is the first-ever non-fiction show in Tamil for an OTT platform. The show has been created by the Madras Meter team and produced for ZEE5.

We could see the excitement about the show among the people in the social media platforms. Lots of people have been constantly reacting about the show and its updates. The first episode of the series Madras Meter has Zee’s famous anchors Archana and Kamal as guests. Both of them are promising actors of Tamil Cinema industry. The show is hosted by Madras Meter RJ Vaidhya, Divya, and Durgesh. Madras Meter Show has much fun and engaging segments like Hashtagger, Celebrity interview, Mock news, Oru Two Minutes Irukka, and more, this show is a must-watch.

Talking about the group, Madras Meter already has a strong fanbase on YouTube, Facebook and Instagram for their videos. Some of their famous videos are Lie Detector, Namma Ooru Maligai Kadai, Dealing with Blackmail, Loosu Ponnu (starring Induja Ravichandran and Sampath) and more. They have also made many popular spoof videos inspired by both Indian and international content.

In the past, Madras Meter has collaborated with ZEE5 and produced several promotional videos. The most recent among them was the What If Letters Were Delayed? for the ZEE5 Tamil original series Postman. Some of the other ZEE5 series they created promotional content for, include WhatsApp Velakkari and American Mapillai.

Like the previous fantastic collaborations, Madras Meter has some high expectations to meet to amaze the audience with its innovative content.