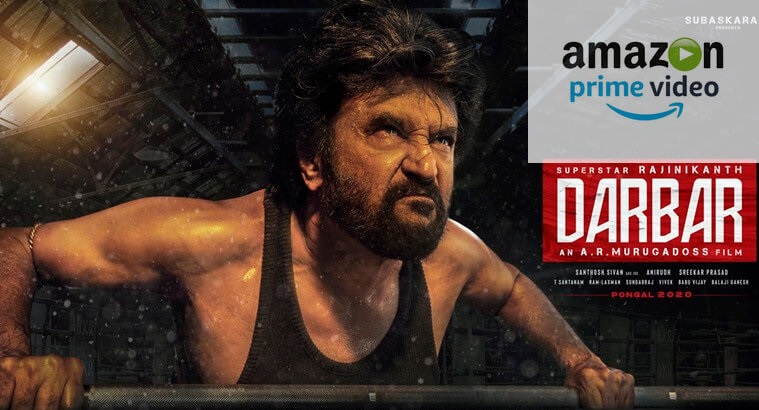 Darbar Movie On Amazon Prime Video India: The film, which was released on 09 January 2020, seeing massive commercial success at the box office. Book your tickets now and watch superstar’s Darbar on the big screens. If you feel like watching it on your own home, here’s some exclusive news. Rajinikanth’s latest film Darbar will soon start streaming on Amazon Prime. Yes, it’s officially confirmed that Amazon Prime Video has acquired the online digital streaming rights of Darbar film. According to sources, the film is likely to get streamed in Tamil, Telugu and Hindi languages.

In Darbar movie, Rajinikanth plays a cop role as Adhithya Arunachalam, who is the Commissioner of Police, Mumbai. Actor Suniel Shetty is the antagonist, who is terrific and super-villain. Darbar film is Rajinikanth’s first collaboration with director AR Murugadoss.

Along with Rajinikanth & Suniel Shetty, Darbar movie also features an ensemble star cast including Nivetha Thomas, Nayanthara, Yogi Babu, Prateik Babbar, Jatin Sarna and more. Anirudh Ravichander handled the music for the film, with all the songs being received well by fans and audiences alike. The song Chumma Kizhi and Kannula Thimiru won praises and crossed a million views on youtube.