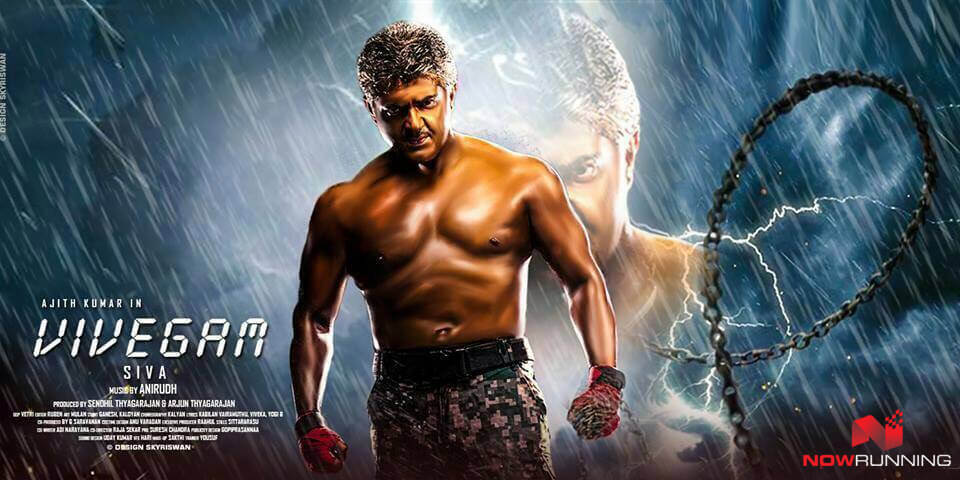 Vivegam is an international spy thriller film starring Ajith Kumar. The story scripts like a crime take place in Tamil Nadu, and the investigation of its origin leads to European nations while Ajith plays the protagonist role, and he is an Interpol officer-in-charge who is going to investigate the crime. Siva directs the movie, and both have teamed up for the third time after delivering two blockbusters ‘Veeram‘ and ‘Vedalam.’ Anirudh Ravichander performed with chartbuster tunes for ‘Vedalam’ who teams up again with Siva and Ajith for this film. Vetri has handled cinematography, and Anthony L. Ruben edited the movie. The other notable members of the star cast include Karunakaran, Thambi Ramaiah, ‘Motta’ Rajendran and Appu Kutty. Vivegam Movie Review will be updated soon.

The film started shooting in Bulgaria and have finished the first schedule in European locations in 31 days. Some part of the film has shot in Hyderabad, and again the team went to Bulgaria to complete large portions of the film. Recently, the shooting is taking place in Chennai. And now ‘Vivegam’ is ready to hit the screens on 24th August 2017.

#Vivegam -Sheer guts from @directorsiva to totally break his mass template. As he said he has delivered a hardcore international action film

.@directorsiva proves again he has great taste for action. He takes it up a notch in #Vivegam. Bike chase sequence is truly exceptional 👌👌

#Vivegam 1st Half : Opening Action Sequence, Bike chase (The best u will see in ANY movie) and interval block.. Theater moments galore..

#Vivegam will be remembered for many things but the primary reason will be hard work and dedication of one man – Ajith Kumar ! 👌 💐

If a story can b told in a certain manner, then #Vivegam is definitely a starting point

#Vivegam
First half, there is no proper motivation behind fights.
Script la so many logical loopholes Siva.
How Ajith oked this one 😨

#Vivegam. 1 hour through. Well executed so far. Good use of geographical locations and technology. Keeps us engaged #AJITHsVIVEGAMRageBegins

The interval comes on a high more after a twist. Setting the tone for an action packed second half #Vivegam #Ajith

A very average first half… cud have been much better.. may not work well with b & c audiences #Vivegam #vivegamreview

**Tweets are not spell checked. Other Tweets will be updated soon!