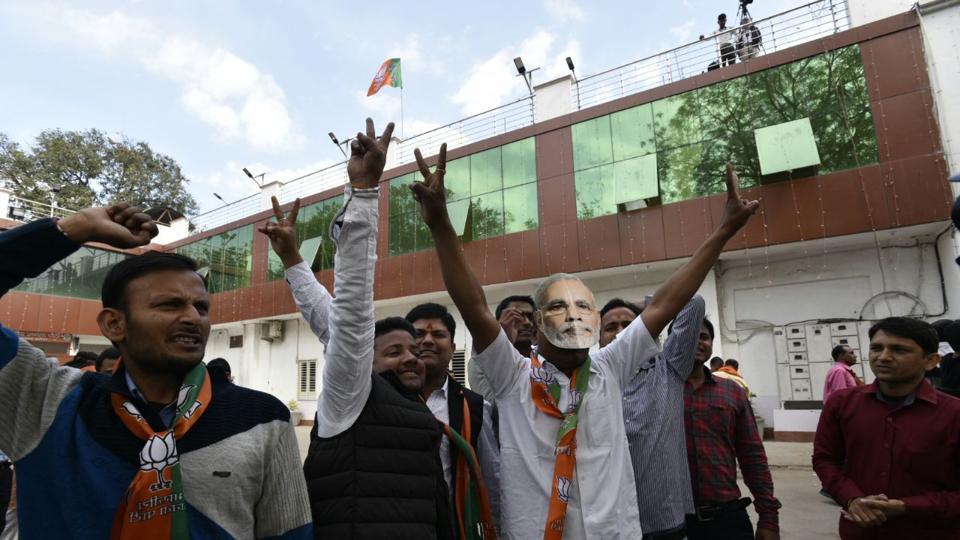 PM Narendra Modi has led BJP to a stunning victory for the saffron party. BJP is above the 250 mark and looks set to emerge as the largest party with a majority to form the government in Lucknow. A saffron party is visible across the length and breadth of Uttar Pradesh, except few area where Samajwadi Party has done well. It will be the more remarkable victory for the BJP in Uttar Pradesh if the trends are correct.

BJP is above the 250 mark and looks set to emerge as the largest party with a majority to form the government in Lucknow.

The Ballot in the Northern state views the most important electoral test that Modi’s BJP has faced since winning the 2014 general election. It would be an endorsement of the Modi’s stewardship of Asia’s third largest economy after his high-risk decision last November that made to scrap high-value banknotes worth 86 percent of the cash in circulation if the BJP does wrest control over Uttar Pradesh by scoring an outright win.

Rajesh Shukla of BJP wins from the seat by 2154 votes, and CM Harish Rawat loses from Kichcha. Prime Minister Narendra Modi congratulated Captain Amarinder Singh on his victory and wished him a happy birthday. AAP leader Alka Lamba said that the party had given a tough fight to established parties in Assembly election.

In Uttar Pradesh, the BJP has ridden a Modi super wave to a massive victory with a party leading in over 300 of the state’s 403 seats. Since winning the 2014 national election, Holi has arrived two days early for the party as it celebrates its most crucial win and the Party also set to sweep neighboring Uttarakhand. BJP’s Chief, Amit Shah said “Historical Mandate,” and he arrived at the party’s headquarters in Delhi to meet the jubilant party workers.

Chief Minister Akhilesh Yadav’s Samajwadi Party which had contested in partnership with the Congress has accepted the defeat. Union Minister Ravi Kumar of the BJP said that it is a mandate for PM Modi and he could see a surge, as it is becoming a tsunami.” The victory will help improve the BJP’s strength in the Rajya Sabha or upper house of parliament.