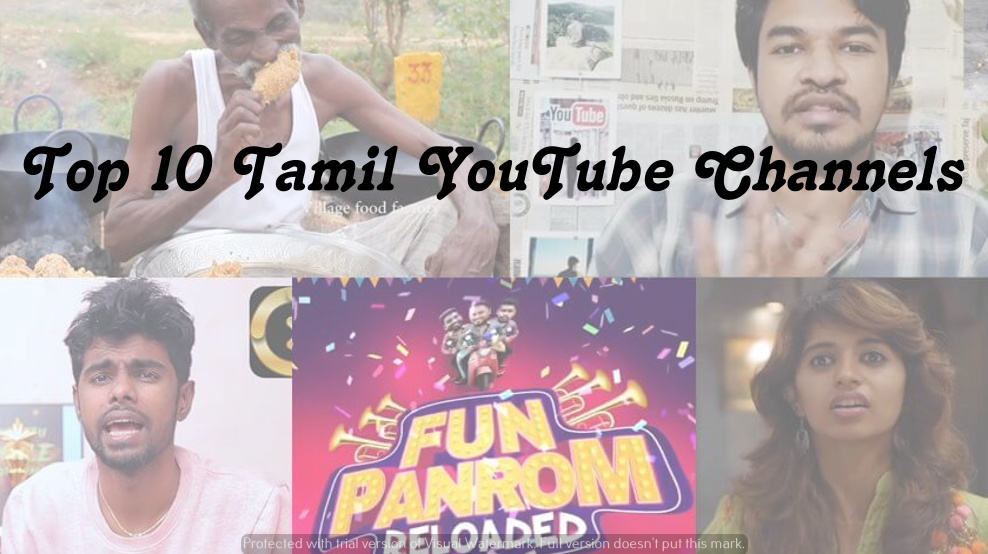 Nowadays, everyone loves to watch videos on Youtube related to their profession, education and more. Initially, it was used only for watching videos, but later people found it is a platform to earn money and also become a celebrity. Most youngsters in Tamilnadu has created various Youtube channels and proved their talents in various genres but mostly comedy. There are thousands of channels available in TamilNadu in which 79 channels are active, and they are uploading 100 of videos for their subscribers. In this guide, we have listed some famous and top Tamil YouTube channels based on their subscribers.

Tamil Talkies owned by Maran is a movie reviewing channel. He is also popularly known as “Blue Sattai Maran”. In this channel, he gives his review for the movies that are released in the Kollywood film industry. He is also directing an untitled movie. The channel acquired 1.07M subscribers and has 224,482,868 views for his interesting review videos.

Tamil Tech is a technical based YouTube channel. Tamil Selvan started this channel on February 13 2016. The channel mainly focuses on mobile & Gadgets reviews, apps, Comparisons, Facts as well as Tech news. He encourages his audience by meeting them and providing surprise gifts. Tamil Tech channel has nearly 1.62M subscribers with 121,529,095 views.

The YouTube channel Parithabangal is owned by Madras Central fame actors Gobi and Sudhakar. They upload creative videos under two category, Parithabangal and Paavangal on this channel. The trolling videos like Bachelor parithabangal, election paavangal, Kootenai paavangal has attracted most viewers. It has more than 1.79M subscribers and 155,876,433 views.

Jump Cuts is a famous YouTube channel owned by Hari Baskar and Naresh. The videos uploaded in this channel are acted in solo by Hari Baskar and recorded by his friend, Naresh. Along with his friend, he worked hard and grabbed the heart of Tamil audience by his performances. Some famous Jump Cuts videos are Bike Scenario, Rain Scenario, Boys Vs Girls, Schools Vs College, Shopping Scenario, Global Drug, Bigboss Vs Tamilnadu, Dad & Son and more. Jump Cuts channel has more than 1.84M subscribers and has received 177,879,430 views.

Eruma Saani is owned by Vijay who himself acts in this YouTube channel. This channel is famous for two celebrities Vijay and Girija. The base of this show is fun and enjoyment made by a bunch of friends. The famous dialogue ‘Hy Aunty’ by Vijay attracts may viewers and made them famous among people. Some of their famous videos are Boys Vs Girls, After Marriage, Students In College, Singles Vs Committed and more. Eruma Saani YouTube channel has 2.25M subscribers with 165,565,725 views.

Nakkalites is a Coimbatore based YouTube channel that is well-known for making troll videos in their native slang. The videos of this channel are quite similar to other trolling videos, but they add some contents to make it even more impressive. The channel was launched on 26 May 2017. They upload videos like Tamil troll, Political satire, Tamil Comedy and some series like Alapparai, Back to School and Urban Nakkalites. This channel has 2.29M subscribers and 281,174,895 views.

RJ Vigneshkanth is the founder of the YouTube channel Blacksheep. It is an infotainment channel which aims to cover all categories of audience. This channel is the upgraded version of Smile Mixture, and it was launched on 29 February 2016. This channel is famous for various shows like Fun Pandrome, Yar Da Komali, Troll Videos and more. Blacksheep YouTube channel has 2.72M subscribers with 413,434,647 views.

The YouTube channel Madan Gowri is not like other comedy channels. The owner of this channel, Madan Gowri, is one among the most famous social media influencer. Madan Gowri is from Madurai, and he started the channel in 2013 but began to upload videos from 2016. In his videos, he mostly speaks about various interesting topics and facts that occur in our surroundings. All his videos are very effective and sensational, so the videos have reached among many people. The channel has reached 2.79M subscribers and 376,932,126 views.

Mic Set is one of the famous comedy YouTube channel. The channel is owned by Sriram who play a lead role in the shows. It was started on July 5, 2017. The Mic Set channel is well-known for its technical strength because the VFX and SFX are really amazing in their videos. The funny, creative and colourful contents have grabbed the viewers. This comedy channel has 3.98M subscribers with 271,129,525 views.

The Behindwoods YouTube channel has ranked number one in Tamil Nadu. The channel covers almost all the topics like news, politics, movie reviews and other entertainments. The Behindwoods channel was started on 13 December 2010, within ten years they have reached 4.04M subscribers and 1,388,179,333 views for their videos. They also upload interviews with trendsetters and celebrities to say about the special things that happen in the cinema world.