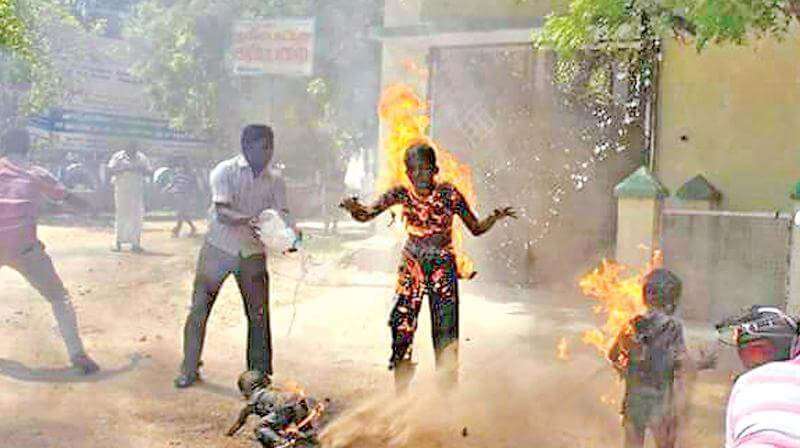 Tirunelveli Self-Immolation Case: On Monday, Four members of a family including two children tried self-immolation in front of the district collector’s office in Tirunelveli, after being allegedly harassed by a moneylender. Gopi, the brother of Esakkimuthu who set self and his family on fire, reported that the police department did not take any action against the money lender even after their repeated complaints.

The four were admitted to a government hospital, where the mother and two children have died during the treatment. Doctors confirmed the deaths in a hospital at Tirunelveli. The husband, Icchhati Muthu, is still battling for life at the government hospital. The four members of the family – Muthu, Subbulakshi and their two children, five-year-old Madisaranya and one-and-a-half-year-old Akshya Bharani also suffered over 70% burns.

According to the media report, Muthu is a labourer, and his family allegedly took the drastic action because he was being vexed and threatened by a local money lender over the repayment of a loan which he had taken a huge interest.

His brother told reporters that the money lender’s men were threatening Muthu and he came to the collector’s office to submit a memorandum along with his family members. The brother who tried to put out the fire was also injured and was taken to a government hospital.

“a proper and thorough investigation will be done.”

He has already passed the details of the case to the police superintendent who has instructed a team to investigate the issue.

Icchhati Muthu had taken a loan of Rs 1.40 lakh and had already repaid an amount of Rs 2 lakh, even though, the money lender was disturbing him for more money for compound interest for the loan.

Laptops May Soon Be Banned from Check-In Luggage