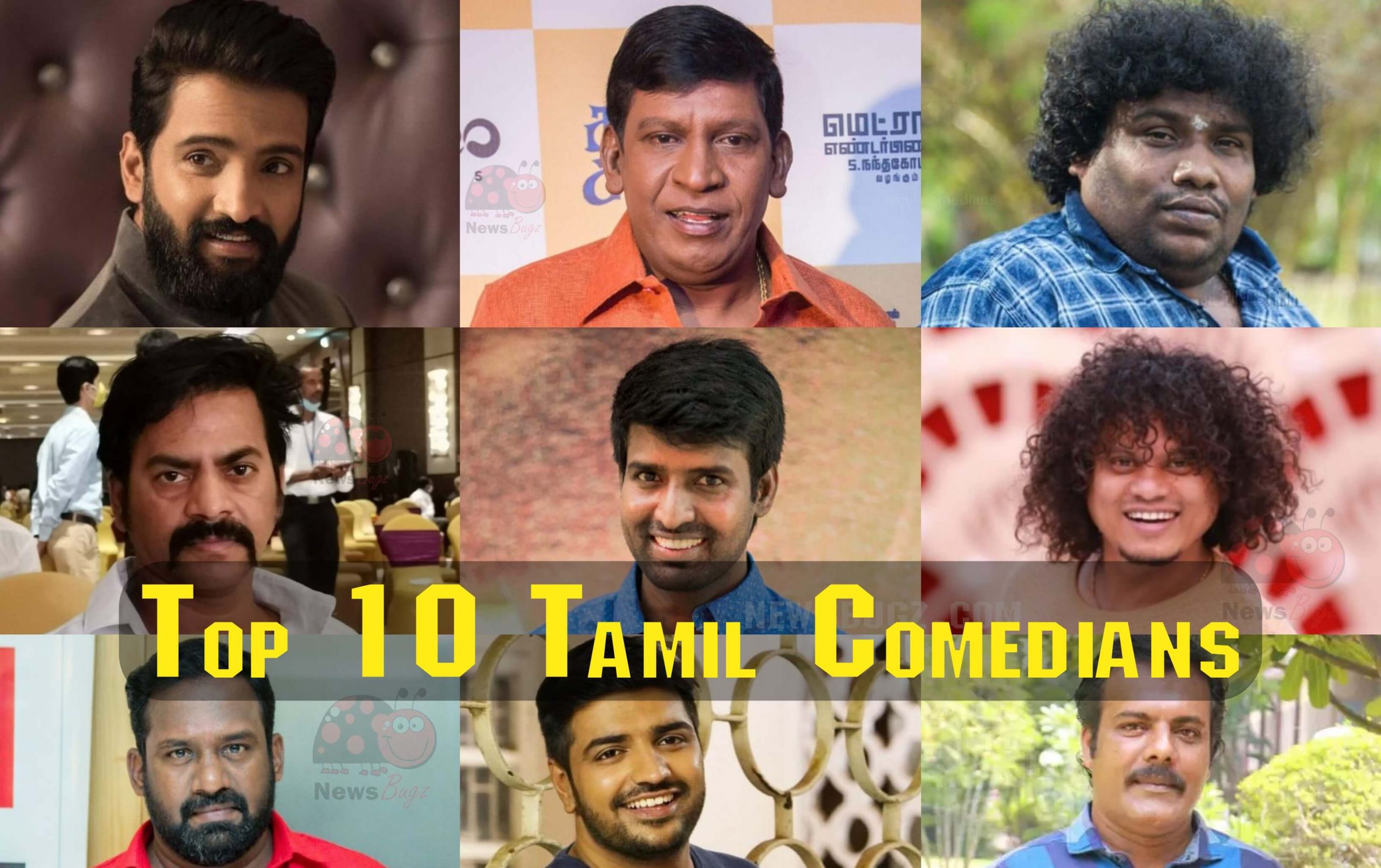 Tamil Comedians List (2022): Comedy actors are essential in every entertainment industry, whether it is a feature film or a web series. Watching a comedy movie or scene will make you feel much better and relaxed. There are diverse comedic performers in Kollywood who has a natural sense of humor. They can certainly make you laugh in a short interval of time. Despite not knowing the comedy artists’ names, the majority of people like to watch their movies in theaters. The universal truth is that no human would ever hate comedy scenes or jokes. In this article, we’ve compiled a list of Tamil comedians’ name list with photos and details.

Here is the list of most popular Tamil comedy movies actors with their photos and details,

Vadivelu is everyone’s favorite comedian. He is also a talented actor, and playback singer. His real name is Kumaravadivel Natarajan. He works in Kollywood since the 1990s in both supporting and lead roles. Vadivelu acted in more than 200 films and his film as a lead actor is Imsai Arasan 23am Pulikesi. Some of his career-best comedic performances include Chandramukhi (2005), Pokkiri (2007), Thalai Nagaram (2006), and Marudhamalai (2007). Vadivelu is also called Vaigai Puyal. Naai Sekar Returns (2022) is his next film to hit the screens directed by Suraj.

There is no meme template without Vadivelu reaction. Vadivelu Memes are very famous around India.

Vivek (aka Vivekanandan) is a popular Indian actor, comedian, TV personality, playback singer, and social activist. He majorly worked in the Tamil film industry. He has won three Filmfare Awards for Best Comedian for the movies, Run (2002), Saamy (2003), and Perazhagan (2004). In 2009, he was honored with the Padma Shri Award for his contribution to the arts. He was formerly called by the nickname, Chinna Kalaivanar. Vivek’s movies to hit the screens are Indian 2 and The Legend.

Goundamani (aka Subramaniyan Karuppaiya) is a Tamil Comedian widely famous for his comic duo with fellow actor Senthil. This duo dominated the Tamil movie industry between the 1980s and 1990s. Some of his greatest performances are Vaidehi Kathirunthal (1984) and Karakaattakaran (1989). Goundamani’s recent movie releases are 49-0 (2015), Enakku Veru Engum Kilaigal Kidayathu (2016), and Vaaimai (2016).

N. Santhanam is an Indian actor and film producer in the Tamil entertainment industry. He came into the spotlight for his outstanding performances in Star Vijay’s Lollu Sabha. In 2008, he played a lead role in Arai En 305-il Kadavul (2008) which helped him to become a successful tamil comedian. Some of his comedic hit films are Siva Manasula Sakthi (2009), Boss Engira Bhaskaran (2010), and Oru Kal Oru Kannadi (2012). In 2018, he was honored with Kalaimamani Award. Recently, he acted in lead roles in Parris Jeyaraj (2021), Dikkilona (2021), and Sabhaapathy (2021). Santhanam’s upcoming movies are Agent Kannayiram and Server Sundaram.

Yogi Babu is an Indian comedy actor who primarily acts in Kollywood movies. He won Ananda Vikatan Cinema Award thrice for his works in Aandavan Kattalai (2016), Kolamavu Kokila (2018), and Pariyerum Perumal (2018). Later in 2019, he acted as the protagonist in Dharmaprabhu directed by Sam Anton. In 2020, he was honored with Kalaimamani Award. Recently, he was seen in films like Hey Sinamika, Beast, and Koogle Kuttapa. Yogi Babu’s upcoming movie releases are The Legend (2022) and Yaanai (2022).

Soori (aka Soori Muthuchamy) is an Indian actor and comedian who worked in Tamil movies and TV shows. He gained popularity for the parotta eating challenge in Vennila Kabadi Kuzhu (2009). Also, it earned him the nickname Parotta Soori. Some of his greatest comedy films are Sundarapandian (2012), Varuthapadatha Valibar Sangam (2013), Rajini Murugan (2016), and Velainu Vandhutta Vellaikaaran (2016). Recently, he acted in Etharkkum Thunindhavan (2022) and Don (2022). Soori’s next films to hit the screens are Viruman (2022) and Viduthalai (2022).

Redin Kingsley is one of the famous Tamil comedians who mainly works in the Tamil entertainment industry. He is famous for his loud style of speech in films. Redin made his acting debut in Kolamaavu Kokila (2018) in the role of Tony. In 2019, he acted in films like LKG, Gurkha, A1, and Jackpot. In 2021, he appeared in Doctor, Annatthe, and Netrikann. His recent releases are Idiot, Beast, and Kaathuvaakula Rendu Kaadhal. Redin’s upcoming movie releases are Agent Kannayiram, The Warrior, Pathu Thala, Naai Sekar Returns, and Coffee With Kadhal.

Sathish (aka Sathish Muthukrishnan) is one of the leading Tamil comedians famous for his timing dialogue. He came to the limelight through the film Ethir Neechal (2013) starring Sivakarthikeyan. Sathish has won Edison Award for Best Comedian for his roles in Kaththi (2014), Thangamagan (2015), and Remo (2016). In 2021, he debuted as a lead actor in Naai Sekar directed by Kishore Rajkumar. Sathish’s upcoming movie releases include Oh My Ghost, Sattam En Kayyil, and Kannai Nambathey.

Munishkanth (aka Ramdoss) is an Indian actor and comedian who appears in Tamil movies. He gained fame for his hilarious performances in Mundasupatti (2014), Maanagaram (2017), Maragadha Naanayam (2017), and Raatchasan (2018). Munishkanth’s movies in 2022 are Clap, Hostel, and Don. Recently, he acted in Vilangu (2022), a ZEE5 web series. The upcoming movie releases of Munishkanth are Aalambana, Thamilarasan, and Agent Kannayiram.

Robo Shankar is an Indian actor, dancer, standup comedian, and mimicry artist. He became famous through the Star Vijay’s Kalakkapovathu Yaaru TV show. In 2019, he also worked as a Dubbing artist for The Lion King (2019) for the role of Pumbaa. His notable performances in Tamil films are Velainu Vandhutta Vellaikaaran (2016), Maari (2014), Maari 2 (2018), Mr. Local (2019), and Plan Panni Pannanum (2021). Robo Shankar’s upcoming movies are The Legend, Iravin Nizhal, Khakhee, and Cobra.

Motta Rajendran (aka A. Rajendran) is an Indian stunt double and comedy actor. He primarily acts in Tamil, Telugu, Malayalam, Kannada, and Hindi movies. He made his Tamil movie debut in Pithamagan (2003) as a prison warden. Rajendran has worked for over 500 South Indian films as a stunt double. His career-best performances in Tamil films are Naan Kadavul (2009), Boss Engira Bhaskaran (2010), and Ivanuku Thannila Gandam (2015). The upcoming movies of Motta Rajendran are Aayiram Jenmangal, Pallu Padama Paathuka, and Ranam.

Pugazh (aka Pugazhendhi) is an emerging Tamil film and Television actor. He is well-known for his performance in Cooku with Comali, a Star Vijay reality TV show. In 2019, he made his movie debut with the film, Sixer starring Vaibhav and Palak Lalwani. He appeared in a few Tamil films in 2022 such as Enna Solla Pogirai, Valimai, and Etharkkum Thunindhavan. Pugazh’s upcoming movie releases are Yaanai, Veetla Vishesham, Agent Kannayiram, and Kasethan Kadavulada.

The Biggest Wins In Casino History