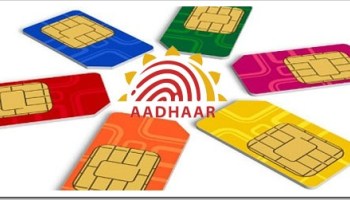 The Supreme Court on Monday directed the Central Government to link Aadhaar number with all the SIM cards within a period of one year. The apex court asked Prime Minister Narendra Modi-led Central Government to frame policies on the rules and regulations to ensure the fact that the SIM (Subscriber Identification Module) cards are not misused by anyone.The court has also suggested the centre to link Aadhaar with SIM cards by devising a plan for all pre-paid sim card users that each person has to fill and deposit a form while at the time of making recharges to verify his/her identity.

The Supreme Court’s order came after hearing a Public Interest Litigation (PIL) which was filed by Lokniti Foundation, Delhi-based NGO. The NGO earlier moved to Supreme Court in 2014 asked to create a database to identify fake mobile numbers among the existing subscriber base by verifying the SIM owner’s identity and asked to make Aadhaar number mandatory for acquiring a new number.

The PIL said that there is a grave risk to the national security because of lack of verification in the mobile phone subscribers. The Supreme Court order makes Aadhaar mandatory for all mobile subscribers, including pre-paid SIM card user to link their SIM cards.

The NGO’s petition in the Supreme Court resembled TRAI’s recommendation, in which it stated that both existing and new customers details should be verified under the Aadhaar based eKYC (Know Your Customer) process to find the fake and misused SIM cards.

However, it is not clear that how Centre plans to executive the process of linking some 1 billion SIM cards with Aadhaar to prove identity. From last year August, after TRAI’s approval, several telco providers are using Aadhaar based eKYC fro SIM cards. The fingerprint of the customers is scanned using a scanning machine, which communicates with the UIDAI server for authentication, to verify their identity while getting the SIM.

On January 23, the Supreme Court gave two weeks of time to the centre to implement a mechanism to ensure proper verification of all mobile subscribers while at the time of issuing SIM cards. On Monday, the centre told the Supreme Court that it needs a period of one year to verify the details, including the identity and address of all mobile subscribers. The court has not mentioned anything in the order for the existing subscribers who do not own an Aadhaar card.

Related Topics:Supreme Court
Up Next