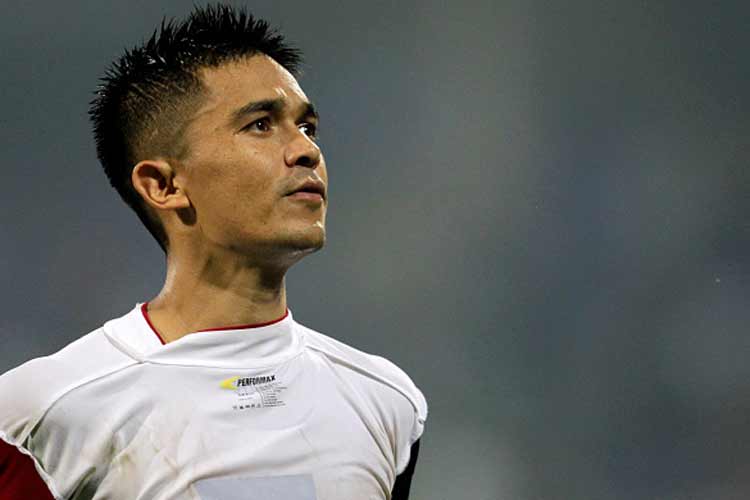 Sunil is the second-highest active international goal-scorer with 74 international goals after Argentina’s Lionel Messi. On 08 June 2021, he strikes 2- 0 against Bangladesh in the joint preliminary qualifying round match for the 2022 FIFA World Cup and 2023 AFC Asian Cup.

Sunil Chhetri was born on 3 August 1984 in Secunderabad, Telangana, India. Sunil Chhetri father’s name is K.B. Chhetri who is an officer in the Electronics and Mechanical Engineers Corps of the Indian Army and his mother Sushila Chhetri. His father is also a football player, with that he played for the Indian Army team at the time when Sunil Chhetri’s mother and his twin sister playing for Nepal women’s national team. He started his career at a young age, with that he took part in various tournaments. Sunil Chhetri has got married to his longtime girlfriend Sonam Bhattacharya on 4 December 2017.

At Mohun Bagan in 2002, Sunil Chhetri started his professional Career. Later he shifted to JCT where Sunil Chhetri scored 21 goals for 48 appearances, for this team he scored most in his career. Then in 2010, Sunil Chhetri signed for Kansas City Wizards of Major League Soccer, where he is the third player from the subcontinent to go abroad. Moreover, his work in the United States is not last long so he soon gets back to India’s I-League here he played for Chirag United and Mohun Bagan once before going back to abroad. At that time he signed for Sporting Clube de Portugal of the Primeira Liga, with that he played for club’s reserve side.

Sunil Chhetri appeared in the Indian National Team, where he gained fame by showing his playing skills. Sunil Chhetri helps the Indian team to win the Nehru Cup in 2007, 2009 Nehru Cup, the 2012 Nehru Cup as well as the 2011 SAFF Championship. He is called as one of the best strikers and best player of the Indian Team at the time 2008 AFC Challenge Cup, with that the Indian Team has won the tournament and in 27 years they qualified for the first AFC Asian Cup. Sunil Chhetri has been called as AIFF Player for four years 2007, 2011, 2013 and 2014. Sunil Chhetri Salary is 1.1 lakhs USD in 2010 but now it may get increased.

Check out the latest photos of Suni Chettri,