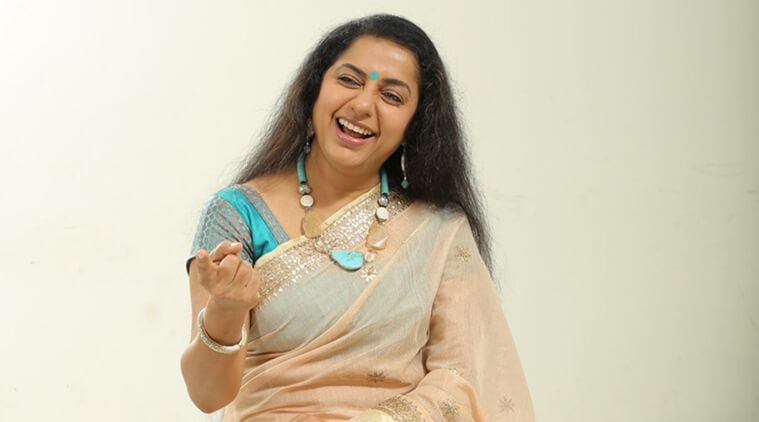 Suhasini is an Indian movie actress, director, dialogue writer and camera assistant, who primarily works in the South Indian film industry. She made her acting debut with the Tamil movie “Nenjathai Killathe,” directed by J. Mahendran in the year 1980. For her performance in that movie, she grabbed the Tamil Nadu State Film Award for Best Actress. Suhasini Maniratnam has considered as one of the greatest movie actresses in South Indian Cinema.

Suhasini was born on 15 August 1961 in Paramakudi, Tamil Nadu, India. Suhasini family is now residing in Chennai, Tamil Nadu, India. Her father name is Charuhasan, a television actor, director and retired lawyer and her mother name will be updated soon. She has two sisters named Nandini Charuhaasan, Subhashini Charuhaasan. She completed her schooling in Government School, Chennai, India and finished her graduation in Cinematography Queen Mari’s College, Chennai and Madras Film Institute, Chennai. Suhasini Manirathnam husband name is Mani Ratnam, a famous filmmaker of the Indian film industry and they got married in the year 1988. Then the couple has a son named Nandan, who was born in the year 1992.

Suhasini started her career as an assistant for the cinematographer Ashok Kumar and also worked as a make-up artist for several leading actors. Then in the year 1980, she made her acting debut with the Kollywood movie “Nenjathai Killathe,” along with actor Mohan. As an actress, she acted in Telugu, Malayalam, Tamil, and Kannada film industries. For her performance in her first movie Nenjathai Killathe, she won the Tamil Nadu State Film Award for Best Actress. In the year 1985, she starred in the movie “Sindhu Bhairavi,” along with actor Siva Kumar. Her performance in that movie, She has won the National Film Award for Best Actress. In the year 1990, Suhasini acted in Rajendra Singh Babu’s movie Muttina Haara with Vishnuvardhan.

Suhasini made her Kannada debut with the movie “Benkiyalli Aralida Hoovu,” directed by K. Balachander in the year 1983. Along with actor Vishnuvardhan, she starred in the various blockbuster Kannada movies like Bandhana, Suprabhatha, Muthina Haara, Hendthig Helthini, Himapatha, Mathad Mathad Mallige and School Master. In the year 1983, she was introduced into the Malayalam film industry by director Padmarajan with the movie “Koodevide,” and in that movie, she acted with Mammootty. Her role in the movie “Vanaprastham,” was nominated in the AFI Fest. In the year 1996, she started her directorial venture with the Tamil movie “Indira,” as well as she has also written the screenplay for this movie. Suhasini also appeared as an anchor for a television talk show which was telecasted on Zee Tamil TV. As an actress, she grabbed two Kerala State Film Awards, three Filmfare Award for Best Actress for Kannada, one Film Fare award for Best Actress for Telugu, one Tamil Nadu State Film Awards and Nandi Awards.