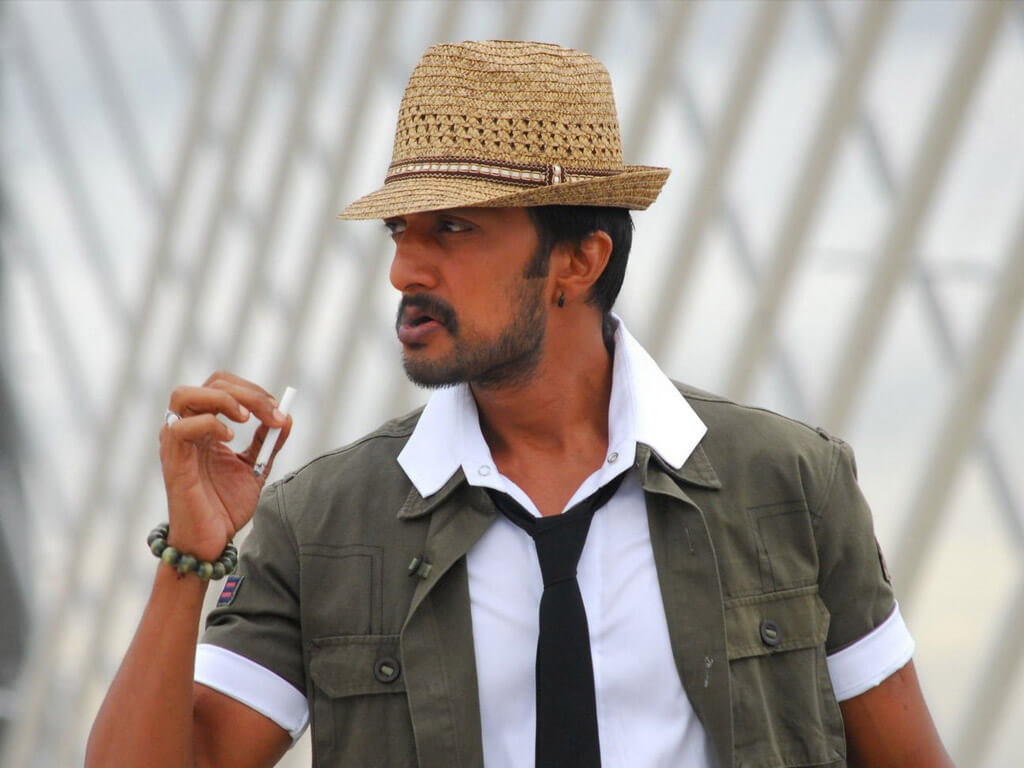 Sudeep is an Indian film actor, filmmaker and television presenter, who primarily works in Kannada film industry. He not only works in Kannada films but also works in other languages like Telugu, Hindi and Tamil films. He made his acting debut with the Kannada movie titled “Brahma,” in the year 1997. He made his Bollywood debut with the movie titled “Phoonk” directed by Ram Gopal Varma in 2008. Since 2013, he appeared as a host for the famous television reality show Bigg Boss Kannada. Check out below for Sudeep Wiki, Biography, Age, Movies List, Family, Songs, Images and more.

Sudeep was born on 2 September 1973 in Shimoga, Mysore, Karnataka. Sudeep family is now residing in Bangalore, Karnataka, India. His father name is Sanjeev Manjappa and his mother name is Saroja. His schooling details will be updated soon and he finished his graduation in B.tech Mechanical Engineering at Dayananda Sagar College of Engineering, Bengaluru. During his college days, he represented Karnataka under-17 and under-19 cricket team. After his graduation, he joined in Roshan Taneja School of Acting in Mumbai for learning acting. Sudeep wife name is Priya Radhakrishna and they got married in 2001. The couple has a daughter named Saanvi, who was born in 2004. In 2015, they got divorced with mutual concern.

Sudeep started his acting career in the year 1997 with the movie “Brahma.” In the same year, he acted in the Sunil Kumar Desai‘s movie “Thayavva” in the supporting role. His first movie as lead role was “Sparsha,” directed by Sunil Kumar Desai in 2000. In the year 2008, he made his Bollywood debut with the movie “Phoonk” directed by Ram Gopal Varma. Then he also acted in other Ram Gopal Varma’s movies like Rann, Phoonk 2 and Rakta Charitra. Following the success of these movies in 2011, he acted in Kempe Gowda and Vishnuvardhana. In 2012, she made his Telugu debut with the S. S. Rajamouli movie “Eega,” along with Samantha Akkineni and Nani. In the year 2015, he starred in the movie “Ranna,” which is the remake of Telugu movie Attarintiki Daredi. In the same year, he also played a cameo role as a Persian arms trader in Baahubali: The Beginning.

Sudeep has also sung songs for the movies like Vaalee (2001), Chandu (2002), Ranga SSLC (2004), Nalla (2004), #73 Shaanthi Nivaasa (2007), Veera Madakari (2009) and more. As a director, he directed the movies like My Autograph, #73 Shaanthi Nivaasa, Veera Madakari and more. Moreover, he also wrote a script for the movie  Just Maath Mathalli. He has an own production company named Kiccha Creations, his first production movie was “My Autograph” in 2006. In the year 1995, he made his debut television serial titled “Premada Kadambari,” which was telecasted on Udaya TV. Sudeep becomes a host for India’s famous television reality show, Bigg Boss Kannada. In the year 2012, he was titled as an “Abhinaya Chakravarthy”, by the Kannada organization, Karnataka Rakshana Vedike. Sudeep was signed as a Brand Ambassador for Joyalukkas, in 2012. In 2013, he was named as a Brand Ambassador for Bangalore Traffic Police Department and Income Tax Department. In the next year, he was appointed as a Brand Ambassador for Intex Technologies Mobiles & Paragon Footwear.