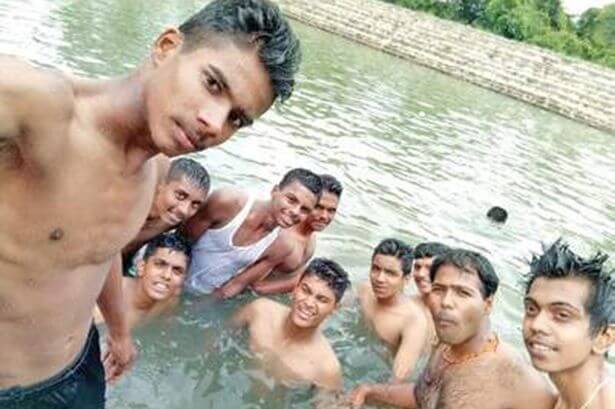 Selfie Death 2017: According to reports, a 17-year-old Bengaluru boy drowned in a temple pond in Karnataka’s Ramanagara district when his friends posed for a selfie; the group selfie shows the Vishwas G drowning in the background. On sunday, Vishwas went for an outing with his friends to Kanakapura in Ramanagara district, Bengaluru. A college teacher told that the group decided to take a dip in a temple pond near Ravagondlu Betta and left the pond after the picnic. Later one of them noticed Vishwas drowning while scrolling through the photos. They called the police suddenly, and the boy’s body was discovered in the pond. He was part of a group of NCC cadets. A teacher told on the condition of anonymity fearing reprisal from the administration that,

“Some students then went through the photos and saw one that had captured the incident,”

One of the students informed Vishwas father, Govindappa, an autorickshaw driver and he filed a police complaint. Ramanagaram superintendent of police Ramesh reported that

“We have filed a case of unnatural death based on the complaint,”

He also added that it appeared to be an unfortunate incident as unnatural death which couldn’t be blamed on a student.

“Moreover, the complaint lodged with us does not mention any negligence on the part of those present,”

Selfie deaths in India, one of the world’s fastest-growing smartphone markets, has forced officials in several states to detach no-selfie zones but people continue their lives to risk for that one memorable picture.