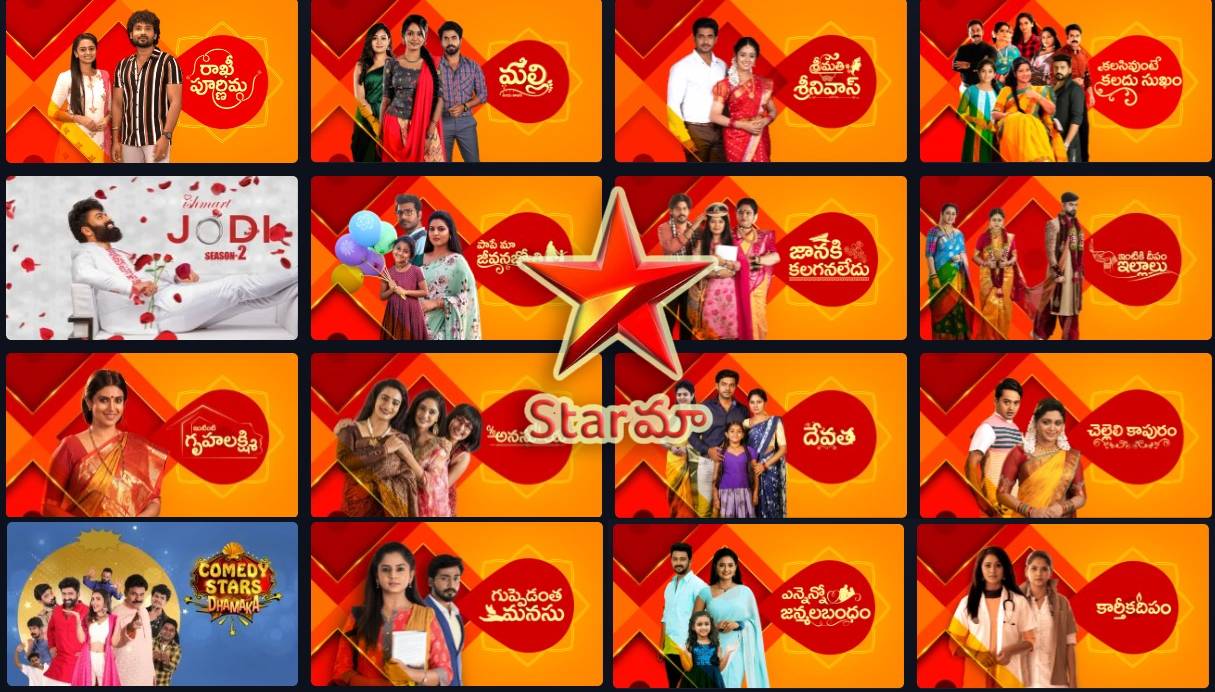 Here we will share the Star Maa channel entire tv serials, programs with timings are given below,

Star Maa serials are popular among the homemakers, as they regularly follow the serial updates. Let’s take a look at the top serials that are currently telecasted on Star Maa. Here are some of the Star Maa Serial with full details Paape Maa Jeevanajyothi, Manasichi Choodu, Kumkuma Puvvu, Chelleli Kaapuram, Guppedantha Manasu, Karthika Deepam, Janaki Kalaganaledu.

Rakhi Purnima is one of the popular Telugu family serial drama directed by Ramesh Palakuruhthi. It narrates the two sets of siblings, which shows the mixed up of emotions. The audience can also stream Rakhi Purnima latest episodes online on Disney plus Hotstar.

Intiki Deepam Illalu is the telugu remake of Saath Nibhaana Saathiya hindi serial. It is directed by Kaalesh and Gopi. The tale of the drama revolves around the newly married bride who faces the consequences of her arrogant husband and mother-in-law. Recently Neema Singh replaced Priyanka Chowdhary as Raashi. Intiki Deepam Illalau serial episodes are online on Disney plus Hotstar.

Care Of Anasuya is the Telugu language serial drama that streams on Star Maa. The serial centers around the mother who finds the groom for her two daughters in a wealthy family. Care of Anasuya serial episodes can be downloaded online on Disney plus Hotstar.

Nuvu Nenu Prema is the new Telugu serial that is set to stream on Star Maa. The serial revolves around, the CEO of a company who falls in love with a middle-class girl. Nuvu Nenu Prema serial episodes are available online on Disney plus Hotstar from May 16.

Srimathi Srinivas is a Telugu drama that telecasts on Star Maa. It is based on a married couple, where the groom marries a beautiful bride with a fake career, does his lies survive is the main crux of the story. It is the Tamil remake of the super hit Sun TV serial Thirumathi Selvam. Srimathi Srinivas serial latest episodes are online on Disney plus Hotstar.

Devatha Anubandhala Alayam serial airs on the Star Maa channel. It started in August 2020 and currently runs with 540+ episodes. It revolves around the girl child who unravels the mother’s past. Devatha serial latest episodes download online on Disney plus Hotstar.

Intinti Gruhalakshmi is a Telugu serial that is adapted from Bengali serial Sreemoye. It is directed by Vijay Krishna. Histrionics like Kasthuri Shankar, Harikrishna, Nikhil Nair plays the lead role in the drama. Intinti Gruhalakshmi serial episodes are available on Disney plus Hotstar.

Vantalakka is the latest Telugu serial from Star Maa channel. It stars Shirin, Dhiraviam Rajakumaran in the pair. Watch all-new episodes of the Vantalakka serial exclusively on Disney plus Hotstar.

Apart from the serials it also telecast reality shows, and programs to keep the audience engaged with their favourite celebrities.

Comedy Stars Dhamaka is a fun entertainer show where various contestants and television celebrities deliver hilarious comedy themes, and dialogues. It is one of the opportunity platforms for big screens in Telugu film industry. The subscribers of Disney plus Hotstar can watch the full episodes of Comedy Stars Dhamka online

Star Maa Parivaar is the television relaity show. In which, the favourite TV stars battle against each other in various rounds. Stream and download the Star Maa Parivaar League 3 episodes only on Disney plus Hotstar.

Star Maa brings the latest junior singer talent hunt show. This show has young participants between the age of 6- 15, showcase their vocal talent and mesmerize the viewers with their performance. Moreover, the winner gets the title and cash prize. Star Maa Super Singer Junior registration, episodes, contestant voting are available on Disney plus Hotstar.

These are the trending serials and reality shows that are telecasted on the Star Maa Channel. In case, if you have missed the latest or past episodes, watch all the Star Maa serial online on Disney plus Hotstar.