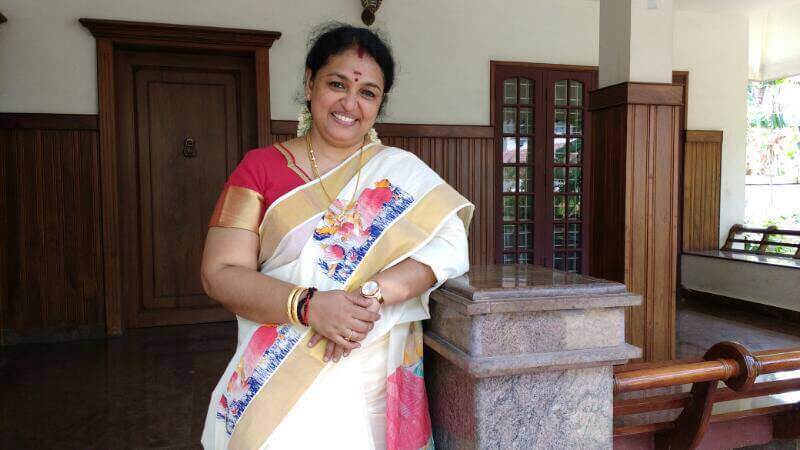 Sreeja Ravi is a voice dubbing artist, who has lent her voice to over 1500 movies. She has also appeared for various commercial advertisements. Sreeja Ravi made her acting debut with the Malayalam movie “Manassu,” directed by Hameed Kakkassery in the year 1973. She started her career as dubbing artist with the Malayalam movie “Utharayanam,” directed by G Aravindan in 1975.

Sreeja Ravi was born in Kerala, India. Her family is now residing in Chennai, Tamil Nadu, India. Her father name is Kunjukuttan,
a mechanical engineer and her mother name is Narayani, a theatre and dubbing artist. In the year 1972, her family shifted to Chennai and her mother started to work as a dubbing artist. Sreeja has featured in some movies and dramas. Sreeja Ravi eventually started her dubbing career by regularly going with her mother to the dubbing studios. She completed her schooling at Fatima Matriculation Higher Secondary School, Chennai and her graduation details will be updated soon.

Sreeja Ravi has eight siblings named Manomohan, Madanmohan, Sreedharan, Prakashbabu, Rasiklal, Jyothish Kumar, Dr Vijayalakshmi Rajan Singh and Premasudha Krishnankutty, out of which two are no more. Sreeja Ravi husband name is Ravindran and this couple has a daughter named Raveena Ravi, a dubbing artist in Tamil, Malayalam and Telugu film industry. Sreeja Ravi is fluent in English, Hindi, Tamil, Telugu, Bengali, Malayalam and Kannada languages. Moreover, she uses all these six major languages to perform dubbing in foreign productions. In the movie “Kandukonden Kandukonden,” she starred along with Tabu in a small role. She has dubbed for some famous actress like Simran, Jyothika, Anushka Shetty and more. Sreeja Ravi has won the Kerala State Film Award for Best Dubbing Artist four times.

Sreeja Ravi As a dubbing artist