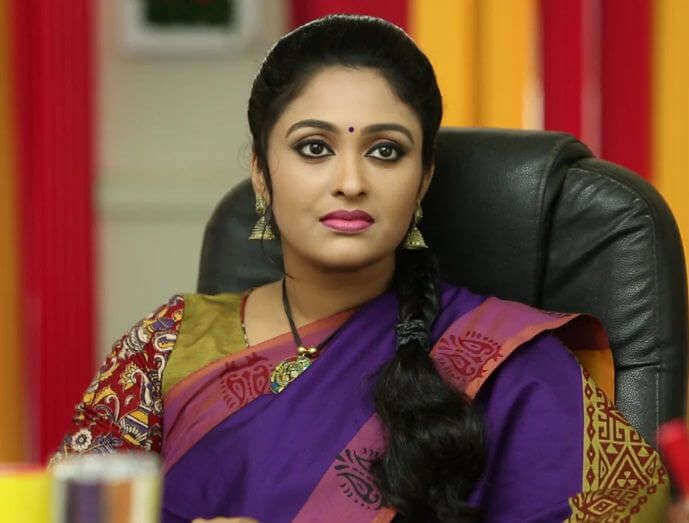 Sreeja Chandran is an Indian television actress who predominantly works in Malayalam and Tamil soap operas. She played the lead in STAR Vijay serials like Saravanan Meenatchi and Mappillai, which made her popular among the Tamil audience. She has acted over 20 serials in Malayalam and also appeared in some telefilms including Thanalmarangalkku Thanalayi. In 2014, she made a cameo appearance in Tamil film ‘Vennila Veedu’. Check out below for Sreeja Chandran Wiki, Biography, Age, Serials, Images and More.

Sreeja was born and bought up in Tiruvalla, Kerala. She born on 6 August 1986 to Bala Chandran and Shalaija Chandran. She did her schooling in Tiruvalla, Pathanamthitta district. Sreeja has completed her graduate degree in B.A. (History) at Calicut University in Kerala.

After graduation, she made her acting debut in Malayalam serial called ‘Pakalmazha’ in Surya Television. She is well known for her roles in Nirmalyam, Ammathamburatty, and Pakalmazha. She Portrayed the role of Lakshmi Devi back to back in 2-3 serials. She made her first entry in Tamil Serial Madurai in Vijay TV at the age of 20.

She also acted in several Tamil serials like Manikoondu, Meera (Vijay TV), Mundhanai Mudichi (Sun TV), Nila and finally she offered to play a lead role in popular serial Saravanan Meenatchi. The serial had received positive reviews and her performance was lauded by the audience.

The serial has been telecasted successfully from 12 September 2011 to 18 October 2013. She received ‘Favourite Actress’ award at Vijay Television Awards 2014. On 2 July 2014, Sreeja married to his co-star Senthil Kumar who acted with her in the Tamil serial Saravanan Meenatchi.