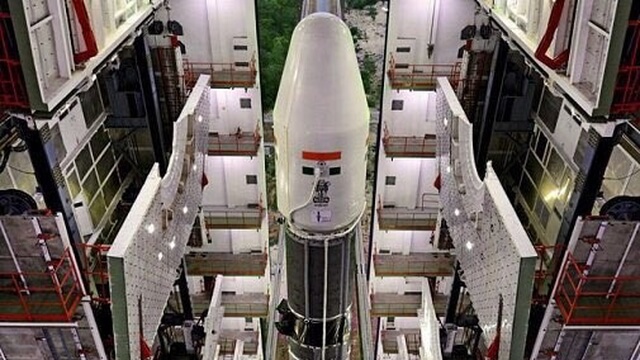 India on Friday successfully launched a South Asian Satellite (SAS) to provide communications and disaster support to neighboring countries, as a space initiative described as a “giant and historic step” towards boosting the regional cooperation. Giving a fillip to the India’s new age space diplomacy and “neighborhood first” policy, the Rs 235 crore satellite GSAT-09 built as the part of a Rs 450 crore project and touted as an ‘invaluable gift’ to India’s neighbors. Lately, GSAT-9 was launched and PM says it as a “Historic Occasion.“

It is seen as a significant move in countering the Chinese interests in the region. The project is funded entirely by India. The cuboid-shaped 2,230 kg satellite is named SAS would enable a full range of services to the neighbors, including in telecommunication, television, VSATs, direct-to-home, tele-education and tele-medicine.

The South Asian Satellite (SAS) mission life is estimated about 12 years. Seven of the eight SAARC countries including India, Sri Lanka, Bhutan, Afghanistan, Bangladesh, Nepal, and Maldives are a part of the ambitious project. Pakistan has opted out of the project, by saying it has its space program.

GSLV-F09 mission is the 11th GSLV flight, called it as a “naughty boy” since it has a patchy record where half of its mission was dropping in failures in the past

On soaring majestically in clear weather, the GSLV-F09 rocket has blasted off around 4:57 PM on Friday from the 2nd launch pad at Sriharikota in Andhra Pradesh’s Satish Dhawan Space Centre about 350 km from Bengaluru, and has injected the satellite into the orbit in a flawless flight.

Modi said the leaders of the seven nations on celebrating the success of the launch during a video conference as quoted “The launch of the South Asian Satellite shows us that even the sky was not the limit if it has come to regional cooperation.”

Modi earlier took to the Twitter to announce the successful launch of the South Asian satellite, which is his brainchild, calling it as the “historic moment.” He tweeted as “It opens up new horizons of engagement. It would also greatly benefits South Asia and our region’s progress.”

On lauding the Modi’s vision, the leaders hailed the mission as a giant step in strengthening the regional cooperation. The launch had taken place away from the media glare, where the journalists are kept at bay and a reticent ISRO keeping the details of the mission and the program under wraps.

In Sriharikota, ISRO Chairman AS Kiran Kumar told, “We have just transported the South Asia satellite from the Earth to geostationary transfer orbit by using our geosynchronous launch vehicle mark II that makes use of an indigenously developed cryogenic engine.”

He also said the satellite operations and control would be carried out from ISRO’s Master Control Facility at the Hassan in Karnataka and that in the coming few weeks the satellite would reach its destination-geostationary orbit. GSLV-F09 mission is the 11th GSLV flight, called it as a “naughty boy” since it has a patchy record where half of its mission was dropping in failures in the past.

The cuboid-shaped 2,230 kg satellite is named SAS would enable a full range of services to the neighbors, including in telecommunication, television, VSATs, direct-to-home, tele-education and tele-medicine

GSAT-09 is a Geostationary Communication Satellite that provides various communication applications in the Ku-band with the coverage over South Asian countries. It could also provide secure hotlines among the participating nations, which would be useful for management of the natural disasters like earthquake, floods, cyclone and tsunami.

Ghani described the launch as the “South Asia’s giant step towards the regional cooperation” and said it makes the region’s integration into a reality. “Today marks the day where the South Asia moves from speaking about the desirability of regional integration to making it a reality. The gap between the talk and action is bridged today.”

After coming to power in May 2014, PM Modi had asked the ISRO scientists to promote an SAARC satellite which could be dedicated to the neighboring countries as the “gift from India.” During his ‘Mann ki baat’ program on last Sunday, Modi had announced that the South Asia Satellite would be the India’s “priceless gift” to its nearby countries.

“On May 5, India would launch the South Asia Satellite. The benefits of the satellite would go a long way in meeting the developmental needs of the countries which are participating in the project,” Modi had said. On extending his “Sabka saath, sabka vikaas” concept, SAS is the part of Modi’s ‘Neighbourhood First’ policy focusing on the India’s South Asian neighbors.

The previous launch of the communication satellite GSAT-8 was on May 21, 2011, from Kourou, French Guiana. South Asia was considered prone to tropical cyclones, heat waves, earthquakes, tsunamis, landslides, and floods. The launch of GSAT-09 is considered significant as it is part of space diplomacy to extend the country’s footprint in the region. It has come close on the heels of a record-breaking launch of 104 mini-satellites with a single rocket in February.

Presidential Poll: We Would Act In Tune With The Interests Of State, Says TRS