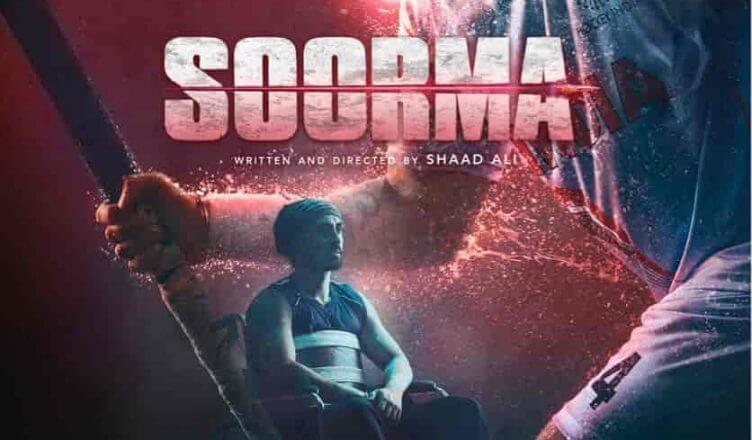 Soorma First Look Poster: The singer-turned-actor Diljit Dosanjh is set to portray hockey legend Sandeep Singh in an upcoming film titled Soorma, which is directed by Shaad Ali. After directing romantic-dramas, Shaad Ali has moved his way towards biopics.

The movie stars Diljit Dosanjh in the lead role and pink fame Taapsee Pannu and Angad Bedi in pivotal roles. The movie is produced by Sony Pictures, Chitrangda Singh and Deepak Singh. The film will be hitting the screens on June 29, 2018.

Today, the first look and official poster of the movie has been released and it features Diljit perfectly celebrates Sandeep’s spirit. Diljit took to Twitter to unveil the poster. He tweeted,

Soorma will be Diljit’s third Bollywood film after ‘Udta Punjab’ and ‘Phillauri’.

In the poster, we see Diljit completely in his character, but he presents two versions of Sandeep.  One the aggressive player who is ready to take on the rival team and the other hand, we see him seated in a wheelchair.

The Hockey champion was seriously injured after being hit by an accidental gunshot in a train, and he was on a wheelchair for almost two years, but then he recovered and was back on the field to play his game. It seems there’s a lot more to know about the hockey legend Sandeep Singh.

Earlier, the makers had released a teaser poster featuring Diljit and Sandeep. Well, the first look and official poster did leave a lasting impression on us, making us impatient to know about the story.