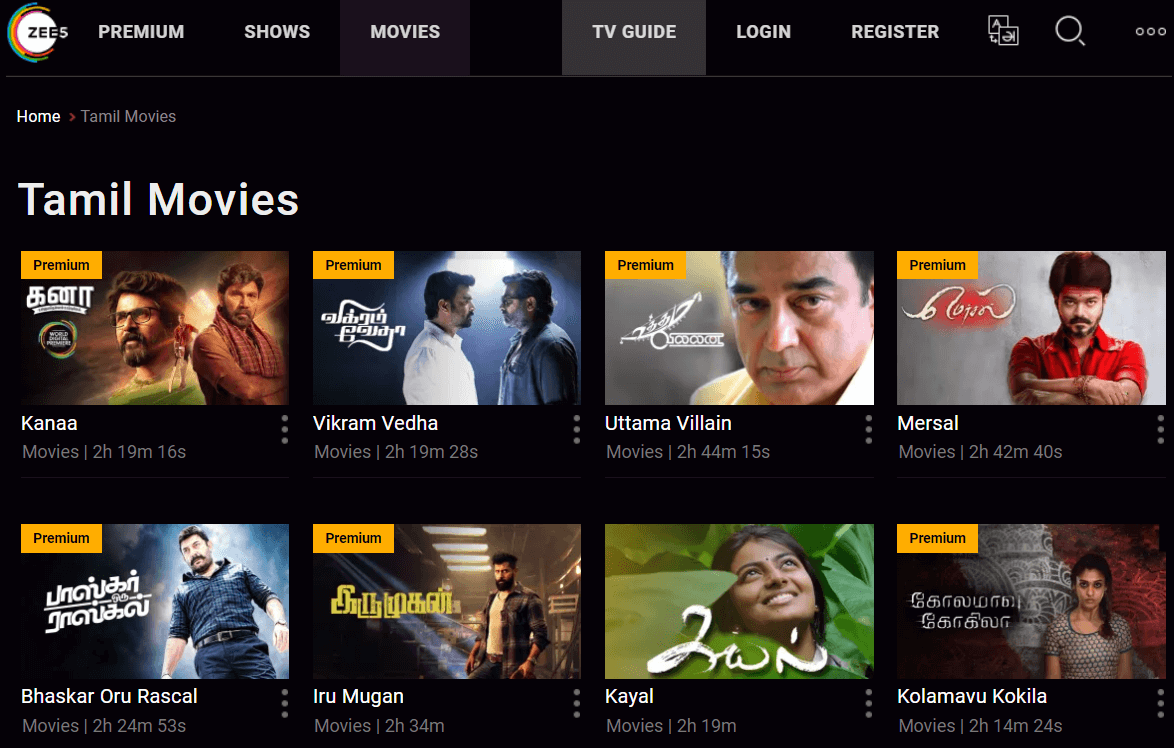 ZEE5 is one of the best sites to watch Tamil movies online. It is the most popular video-on-demand services that offer collections of Tamil movies online. The Kollywood industry is making a variety of films by experimenting with all genres like comedy, thriller, horror, action, sad ending, love story and more. For the fans who love to watch the regional content, this movie streaming website is making the way easier. Here we have listed some of the best Tamil action movies that are available to watch on ZEE5 right now.

Dhilluku Dhuddu 2 is a horror-comedy movie written and directed by Rambhala.

The movie stars Santhanam and Shritha Sivadas in the lead role along with Motta Rajendran, Bipin, and Urvashi in the supporting roles.

Singapore based musician, Shabeer has composed the music for this horror flick.

The story revolves around Viji (Santhanam), who is made to fall in love with a girl Maya (Shritha Sivadas). When Viji comes to know that Maya is protected by a ghost, he decides to set her free from it.

Dhilluku Dhuddu 2 received positive reviews from both critics and audiences. Overall, the film is a pakka family entertainment.

The film features Vishal, Arjun and Samantha Akkineni in the lead roles.

The movie produced by Vishal under Vishal Film Factory banner while Yuvan Shankar Rajascored the music.

The story mainly concerns hacking and the leak of personal information. It revolves around major Kathiravan (Vishal), who borrows loan from a bank by providing fake documents. Later, the entire money from his account gets draw off by the unknown member. When Kathiravan begins the investigation, he gets to know about the cyber hacker behind this crime White Devil (Arjun). Will Kathiravan catch the White Devil and get his money back forms the rest of the story.

Irumbu Thirai received rave reviews from the critics, especially for Vishal and Arjun’s performance. It is a must-watch film which would be a rewarding experience for the audience who like action movies.

Kavan is a 2017 Tamil action thriller film written and directed by KV Anand.

Hip Hop Thamizha has composed the music for this epic film.

Kavan tells about the good and bad sides of Media. The director has delivered a good message with commercial elements like songs, comedy, romance, sentiments and action.

Rajini Murugan is a 2015 Tamil action comedy film written and directed by Ponram.

The story revolves around Rajini Murugan (Siva Karthikeyan), an unemployed youth who is heir to his grandfather’s property. He is also in love with Karthika (Keerthy Suresh) but faces opposition from her father. Meanwhile, an antagonist (Samuthirakani) creates a rift on Sivakarthikeyan’s family.

Rajini Murugan is a fairly entertaining family drama which makes you smile throughout the film.

Kedi Billa Killadi Ranga story revolves around two unemployed best friends, Kesavan (Vemal) and Pattai Murugan (Sivakarthikeyan). They both tried to enter politics by impressing people but they lose in the election. Similarly, they are also rejected by the ladies whom they love. Will they achieve any success in life is the rest of the story.

The film was a huge success and was also remade in Kannada as Katte.

Along with this, there are collections of Tamil Movies online on ZEE5. So, get your ZEE5 subscription now and start watching movies. Keep visiting this space for more Tamil cinema news and updates.

A Mechanical Engineer by education but a content writer by passion. He has been in the field of Content Writing and Marketing for four years. He loves to write in a wide range of genres. Contact me at [email protected]m