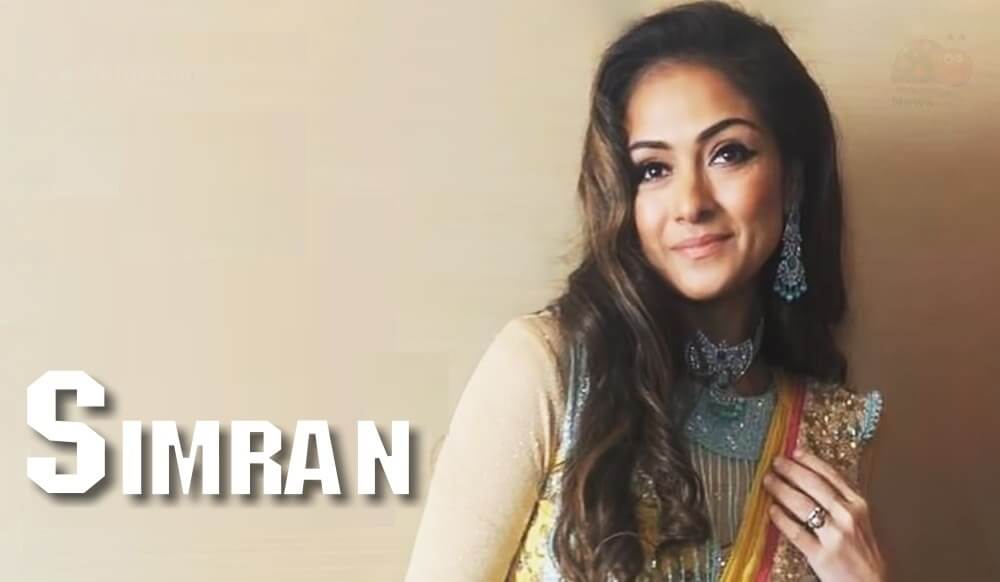 Rishibala Naval is an Indian film actress best known by her stage name Simran. She is also a model and television personality. She has predominantly appeared in Tamil films, along with Telugu language films, as well as a few films in Hindi, Malayalam and Kannada. She is considered as one of the most versatile actresses of her period.  Throughout her career, Simran acted in over 75 Indian films and worked alongside most of India’s leading actors. Her latest movie Rocketry: Nambi Vilaivu received great expectations from the audience and it will be released in theaters on July 1.

Simran was born as Rishibala Naval in Mumbai, Maharashtra on 4 April 1976 into a Punjabi family. Her father is Ashok Naval and her mother is Sharda. She has two sisters, Monal Naval and Jyothi Naval, and a brother named Sumith. She did her schooling education from St. Anthony’s high school, Versova, and completed her B.Com in Mumbai and was modelling simultaneously. She speaks Punjabi, Hindi, English, Tamil, and Telugu. Simran is a trained Bharatanatyam and Salsa dancer. She married her childhood family friend Deepak Bagga on 02 December 2003. The couple was blessed with two sons, Adheep and Aadit.

She started her career in acting and made her debut in the Hindi movie Ek Chadar Maili Si (1986) as a Child artist and her first lead role in Hindi Movie Sanam Harjai (1995). Simran has worked in many popular films such as V.I.P, Thulladha Manamum Thullum, Vaali, Narasimha Naidu, Kannathil Muthamittal, Pammal K. Sambandam, Panchathantiram, Vaaranam Aayiram, etc. Simran has acted in several languages and always maintained a successful balance in Tamil, Telugu, Hindi, Malayalam, and Kannada.

After her marriage, she had given up films and has moved on to the small screen where she acted in Jaya TV’s serial Simran Thirai. In 2009, she did a guest role in the Telugu serial Sundarakanda, which aired on Gemini TV. The serial was dubbed in Tamil as Sundarakandam and telecast on Polimer TV. In 2012, Simran hosted a game show called Jackpot, on Jaya TV which was earlier hosted by Kushboo and Nadhiya. She then acted in a serial Agni Paravai in Puthuyugam TV. She is also one of the judges on the reality show Dance Tamizha Dance in Zee Tamizh.

Take a look at the cool new photos of Simran,