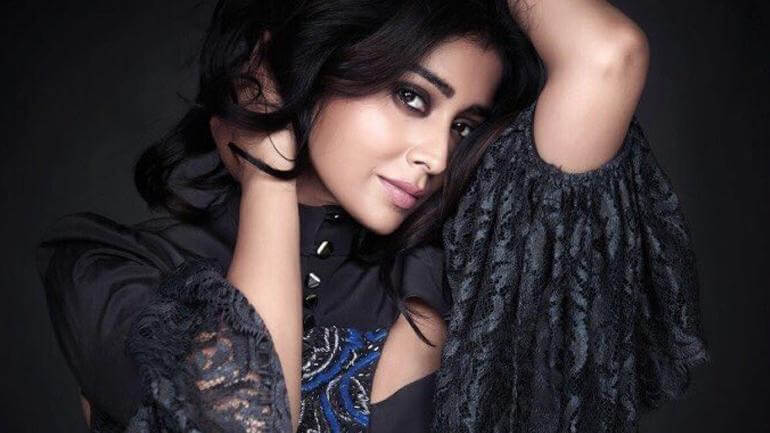 Shriya Saran is one of the famous Indian Movie Actress and model who works in South Indian as well as in Bollywood and American film industry. In the year 2001, by her dance master, she got an opportunity to dance in the Renoo Nathan music video Thirakti Kyun Hawa which is her debut music video. Her dance was attracted by most of the Indian filmmakers and she taken to films. Her debut movie is Ishtam which is a Telugu movie, with that she got commercial success in the movie Santhosham in the year 2002. Shriya Saran upcoming movies are Naragasooran in Tamil, Tadka in Hindi and Veera Bhoga Vasantha Rayalu in Telugu. Check out below for Shriya Saran Wiki, Biography, Age, Movies List, Husband.

Shriya was born on 11 September 1982 in Dehradun, Uttarakhand, India. Shriya Saran Family her father is Pushpendra Saran Bhatnagar and her mother is Mother Named Neeraja Saran Bhatnagar who is a chemistry teacher, and she has a brother named Abhiroop Saran, who workes in FCB Ulka Advertising Ltd, Mumbai. She did her schooling in Delhi Public School, Mathura Road, Delhi, and did her graduation in Bachelor of Arts at Lady Shri Ram College in Delhi. Shriya Saran started her career in the year 2001 from the Telugu Movie Ishtam, and she appeared in all film industries such as Tamil, Telugu, and Bollywood Industries as well as she did few movies in English, Malayalam, and Kannada languages as well. Shriya Saran husband name is Andrei Koscheev; she got married to her long-term boyfriend on 19 March 2018.

Shriya Saran debut Hindi movie is Tujhe Meri Kasam in this movie she appeared in a supporting role in the year 2003. Simultaneously she appeared in many leading roles in Telugu movies like Tagore which won the International Indian Film Academy Award. Then her Tamil debut movie is Enakku 20 Unakku 18 she featured as a football coach the same movie was shot simultaneously in Telugu as Nee Manasu Naaku Telusu. She established her talent by acting in various language movies, in her first 10 films she acted in 3 languages, and later she has won more awards as well for her acting.

Check out the latest photos of actress Shriya Saran,