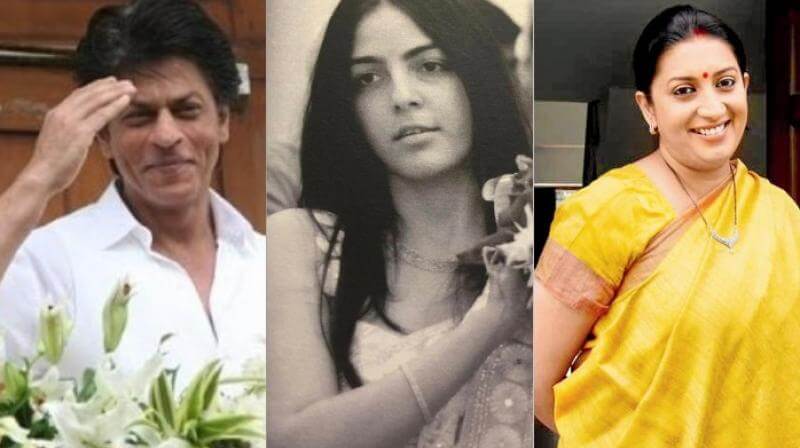 In his Instagram account, he said his childhood friend Zubin Irani’s daughter has grown up and so pretty, and he also mentioned that ‘Just for records I named her Shanelle’ he added. In just 21 hours Shah Rukh Khans’s post is liked by about 2.2 lakh people.

Union Textiles Minister in her post on Instagram wrote that ‘#family photo someone is being missed sorely’ and posted the photo of Shanelle Irani.

Along with 2.2 lakh likes the post of Shah Rukh Khan (SRK) received lots of comments as well, and one such comment is made by Shanelle Irani herself.

Her comment to Shah Rukh Khan for his post onIinstagram was ‘Thank you @iamsrk. You are too kind as always, hope to see you soon’.

Other than Shanelle Irani, also many Shah Rukh Khan’s followers on Instagram and his fans commented on the post; few such comments are; ‘Love the name Shanelle. My god child’s name is that. Every time I hear that name I think of CHANEL, and it’s my fav’ said one follower of Shah Rukh Khan. ‘Wow love the name,’ comments another follower.

Shah Rukh Khans’ strong connection with Delhi can never end, he always recalls his good old memories spent at Delhi. Whether it’s his days at Delhi school and his college days and also his days spent at the Delhi theater. He always used to share those beautiful old memories. In that list of his old memories, he also shared an interesting his interesting bond between Zubin Irani, his childhood friend by reposting the photo of Shanelle Irani, stepdaughter of Smriti Irani on Instagram posted by Smriti Irani.