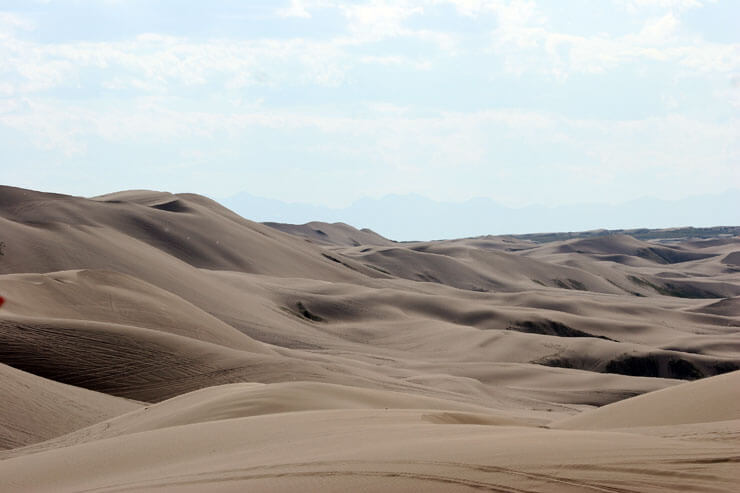 Sand is one form of granular material composed of finely divided rock and mineral particles found on the Earth. Sand is indeed necessary for any life to take place since, without sand, we will not get food, minerals and other natural sources of energy. Places in the mother earth differ from region to region. Not all the places are flat. Some places like deserts and in the coastal regions we could see the sand being eroded to one side and thus forming a hut-like structure. One could imagine this state as the house build on the beach sand with sharp edges on the top. The hut-like structure is termed as the Sand Dunes. Not all the dunes formed resembles the hut-like structure because, due to the force of the wind, it differs. Sand dunes are also a natural event in some parts of the earth as like the rain, fog, mist etc. The Sand dunes are classified into different types and its formation is also described in detail. Get into to know the complete details about Sand Dunes.

Before describing the sand dunes, we need to know what sand is. Sand is considered to any loose, and granular material having grains that are 0.05 to 2.0 millimeters in diameter. The designation “sand” would not refer to how the material was formed or like what it is made of. Sand come from all three major rock types like igneous, metamorphic, and sedimentary. Sand could be primarily one mineral or material, or it could be a mixture.

A dune is usually a mound of sand formed by the wind, generally along the beach or in a desert. Dunes will form when the wind blows sand into a sheltered area behind an obstacle. Dunes grow as grains of sand accumulate. The modern word “dune” has come into English from French c. 1790, and which in turn has come from the Middle Dutch dūne. In physical geography, a dune is a hill of loose sand built by the wind or the flow of water.

Usually, every dune will have two sides namely Windward side and a Slip face. A windward side of the dune is a side where the wind is blowing, and it pushes the material up. A dunes slip face is just the side without wind. i.e., The downwind side of the dune is the slip face. A slip face is usually smoother than a dune’s windward side. A collection of dunes is referred as a dune belt or dune field. A large dune field is called an Erg.

Most kinds of dunes will be longer on the windward side where the sand is pushed up the dune and have a shorter “slip face” in the lee of the wind. The valley or trough between the dunes is called a slack. A “dune field” is an area covered by extensive sand dunes. Dunes occur, for example, in some deserts, and along some coasts. 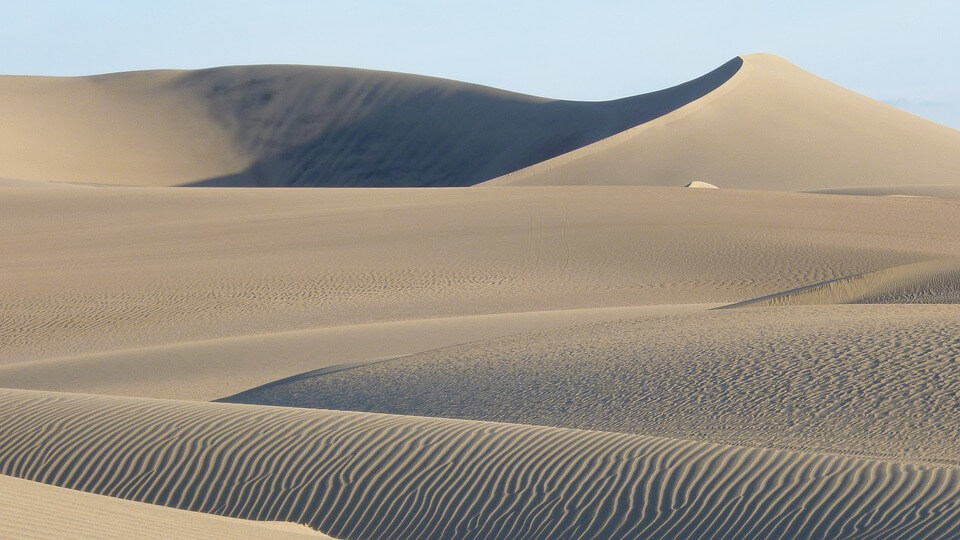 Sand dunes are the mounds of windblown sand that vary greatly in size, from less than one meter to tens of meters high. Its size depends upon the supply of the sand. There is even greater variation in the area covered by the dunes. Many of the more recognizable dune forms are ridges or complexes of mounds or crescents. Dunes occur in different shapes and sizes and are formed by interaction with the flow of air or water. However, the shape of individual dunes is evenly variable. The shape relates to the direction and strength of the wind forming it, as well as the amount of sand available.

Dunes can also be formed by strong currents beneath the water. Dunes can be formed by the action of water flow (fluvial processes), and on sand or gravel beds of the rivers, estuaries and the sea-bed. Underwater dunes are called subaqueous dunes and are common in the ocean, rivers, and canals.

In some coastal areas, there might have one or more sets of dunes running parallel to the shoreline directly inland from the beach. In most cases, the dunes are important in protecting the land from potential ravages by the storm waves from the sea. Though the most widely distributed dunes are those associated with the coastal regions, the largest complexes of dunes are found inland in dry areas and are associated with the ancient lake or sea beds.

Dunes can be large geographic features or merely a small bumps. Shape classifies most sand dunes. The different kinds of sand dunes have certain characteristics based on the velocity and direction of the wind, the sand supply and how vegetation covers the dune. Five major dune shapes are crescentic, parabolic, linear, star, and dome.

Crescentic dunes are shaped like the crescents, or the shape of a wide letter C. The wider side of a crescentic dune is its windward side, with a small, semi-circular slip face on the other side. The Crescentic dunes are the fastest-moving type of dune, and it is also the most common type. It is otherwise called as the Barchan sand dune.

Parabolic dunes are similar to that of the crescentic dunes. Their shapes are roughly the same, but the slip face of a parabolic dune is on its inward side. Parabolic dunes are also called as blowouts, since winds blow out the center of the dune, leaving just a rim on the outside. The sand dune of this kind requires a large amount of sand and strong winds. 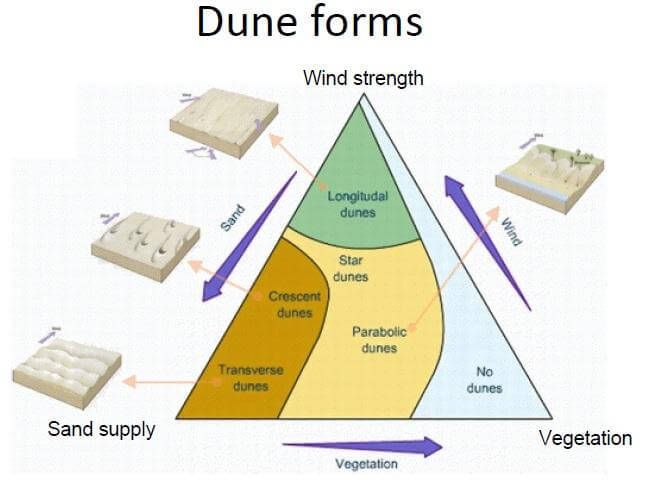 Linear dunes form a straight or nearly straight lines. Some linear sand dunes are shaped like a wiggling snake, with regular curves. Linear dunes develop where the wind pressures are nearly equal on both the sides of a dune. It is also called as longitudinal dunes.

Star dunes often have pointed ridges and slip faces on at least three of its sides. Star dunes will be developed in the regions where winds come from several different directions. As Star dunes need at least three different wind currents, it is more common in windy areas. They are alternating windward and slip faces and the distinct transition between the sides create the star dunes signature star like appearance when viewed from above.

Dome dunes are the rarest type of dune formation ever found. They are circular, and it does not have a slip face. The wind could blow material onto the dune from any side. It shares some characteristics with the crescent and parabolic dunes. It is also called as zibar dunes. It has an oval shape as opposed to a C or U-shape. 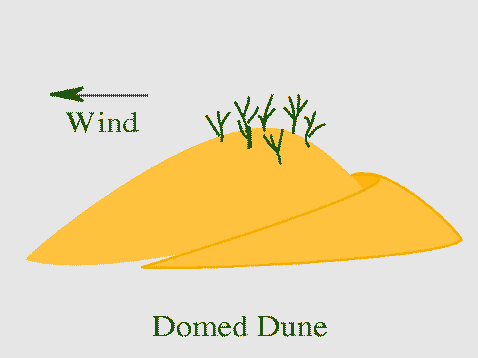 A sand dune will be formed with the following three things:

When these three things merge, a sand dune will be formed. As the wind picks up the sand, it travels, but only about an inch or two above the ground. The wind moves the sand in one of three ways: 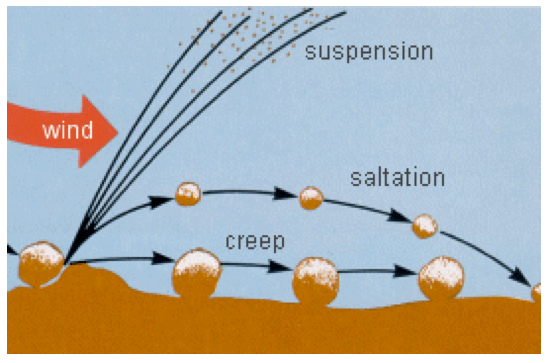 Although there will be no more than a pile of wind-blown sand, dunes take on an unusual range of sizes and shapes. It depends on the amount of sand available, the size of the sand, and the prevailing wind directions. Over time, dunes would grow, shrink, or move in the direction of the prevailing winds.

Studies also indicate that a supply of dry sand is the most important factor for the formation of sand dunes. As a means of transporting and sorting (i.e., the wind, water) is not rare or out of the ordinary. Running water and the normal winds can do this. Strong winds or the action of water cannot initiate the formation of the dune, however, without a supply of sand. As mentioned, the size and shape of a dune depend on the wind and the amount of sand available.

When the amount of sand being equal, then wind conditions have a strong influence on the shape of a dune field. Constant winds tend to form more regularly shaped dunes or even long ridges. Irregular or changing wind directions result in irregular-shaped dunes.

Once in motion, the sand will continue to move until an obstacle causes it to stop. The heaviest grains will settle against the obstacle, and a small ridge or bump forms. Because the obstruction breaks the force of the wind, the lighter grains gets deposit themselves on the other side of the obstacle. Eventually, the surface facing the wind crests, and the lighter grains of the sand cascade down on the other side, or the slip face. The sand dune may actually move over time in this way, and it rolls along, maintaining its shape as it goes.

Sand dune crest as the wind moves sand up to the top of the sandpile, the pile becomes so steep and it begins to collapse under its own weight and the sand avalanches down the slip face. The pile will stop collapsing when the slip face reaches the right angle of steepness for the dune to remain stable. It is the angle, which scientists call the angle of repose, and is usually about 30 to 34 degrees.

After enough sand builds up around an obstacle, the dune itself becomes the obstacle, and it continues to grow. Depending on the speed, the direction of the wind and the weight of the local sand, the sand dunes will develop into different shapes and sizes.

Stronger winds tend to make taller dunes while the gentler winds tend to spread them out. If the direction of the wind is the same over the years, dunes gradually shift in that direction. Any vegetation that crops up will stabilize the dune and prevent it from further shifting.

What is an Atom? Definitions & Examples | Let us learn Basics