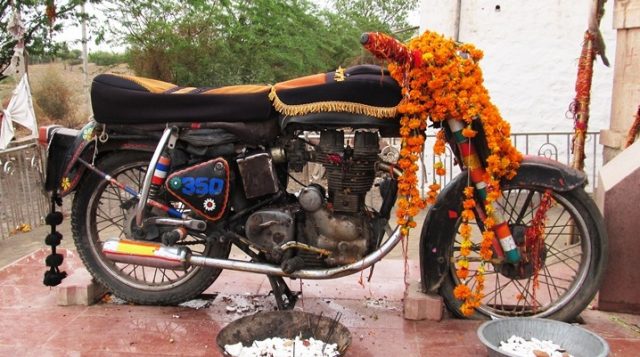 It is very common to find temples in every street of India but it is very strange to find a temple where you worship a bike. A village in Jodhpur worships Royal Enfield bike as the main deity since years. The OM Banna or Bullet Baba temple is famous among the villagers of Pali district, located about 50 kilometres from Jodhpur in Rajasthan. The temple is dedicated to Om Singh Rathore and his 350cc Royal Enfield Bullet.

On December 2, 1988, Om Singh Rathore on his way back home, lost balance in driving and collided with a tree. He lost his life on the spot and the Royal Enfield bike fell into a ditch nearby. the police recovered the bike to the police station but found the bike next morning in the site where OM Banna gave his last breath. Once again the police took the bike back to the station and emptied the fuel but the scene once again repeated next morning.

Due to these continuous incidents that took the bike back to the same place, people believed that Om Banna is alive and started worshipping the bike. The news spread like wildfire and people from neighbouring villages came in large numbers to pay their tribute to Om Banna.

Local people believe that if you are travelling on Pali-Jodhpur route and returned without stopping and worshipping the Bullet Baba you might face difficulties and may not reach your destination safely. Another interesting fact that locals say is that the motorcycle miraculously starts at times on the date and time of Om Banna’s death.