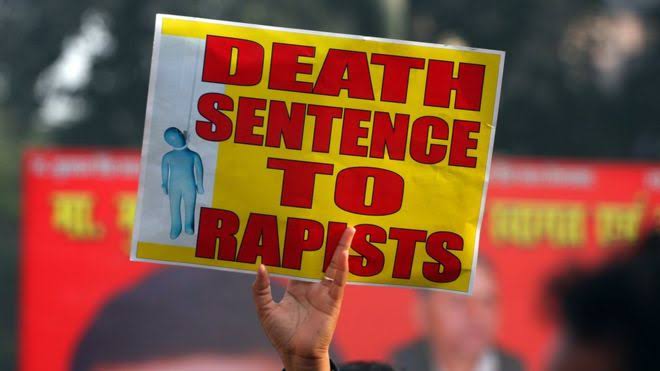 Last few months have been full of distress for every Indian. With two recent rape cases shook the nation’s conscience, people have lost faith in humanity. According to the latest report by the National Crime Record Bureau (NCRB), Rape is more common a crime than murder in India.

In India, punishment for rape is given in section 376 of the Indian Penal Code. The minimum punishment for rape is imprisonment for two years and fine (Section 376B, IPC). Later in April 2018, the nation allows Capital Punishment if anyone convicted of raping children under the age of 12. But some people can’t conclusively say that the death penalty is an effective deterrent.

Capital punishment (Death penalty) is a government-sanctioned practice of executing someone as punishment for a crime. In Muslim countries, the punishment for rape is instant death. According to sources, the percentage of rape crimes in Muslim dominated countries is low when compared to countries where punishment other than death is admitted to rapists.

The death sentence for the men who raped and murdered Disha, in November 2019, is setting a dangerous example for future rape convictions. People’s are feeling great happiness on social media platforms and on the streets over the killings by the police stems from the public anger and anguish over the burgeoning crimes against women.

Some of the facts that you must know about rape cases,

The Shamshabad police have encountered all the four accused in brutal rape and murder of Hyderabad veterinary doctor Priyanka Reddy.

Roja from Kanchipuram was gang-raped and brutally murdered. The 19-year-old girl was murdered by hanging in Tamil Nadu. The social networking sites are flooded with angry voices and emotions. People are expecting justice to those deaths and a permanent solution for the safety of women.

On 16 December 2012, The gang-rape of a 23-year-old student on a public bus. She was with a male friend who was harshly beaten with an iron rod during the incident.  This incident glittered large protests across the capital Delhi.

In Tamil Nadu, a teenage girl was Gang Raped in a private bus by the two drivers and a conductor in Salem. In this case, three of them were charged and arrested. This case reminds the 2012 incident Delhi Nirbahaya gang rape case. Those three were charged with these following sections Protection of Children from Sexual Offences Act(POCSO) and in the Prevention of SC/ST Atrocities Act and also for kidnapping the girl, intimidation and for attempt rape.

A 54-year-old School teacher of a private Marathi-medium school in Ulhasnagar was arrested for allegedly sexually assaulting three minor boys and two girls. Bhalchandra Bhangale is a teacher who accused of targeting students aged eight to nine and threatening them to keep quiet. A case of rape under IPC section 376 and sections of Protection Of Children from Sexual Offences was registered against the teacher.

Three men in Bansdeeh area had raped a 14-year-old Dalit girl allegedly, the police said. Ajay Paswan, who lives in the village at same area had taken the girl to his home, he is one, and two others allegedly raped her, they said. Paswan arrested, and FIR had been registered by the Superintendent of Police Sujata Singh.

Rohingya Muslims in the refugee camps in Bangladesh are experiencing horror with threats from all fronts. Mohammad Kasim, 40, allegedly witnessed his daughters’ gang-rape and killing. When he tried to stop the attackers, the Burmese military, they branded his thigh with a red-hot knife, he allegedly said. He also added that he doesn’t know his wife and other children’s are. He used to have a home in Rakhine and also a car. All gone. Daughter Gang Raped at Rohingya Camp came viral in social media.

In early January 2018, Asifa Bano, an 8-year-old girl was brutally raped and murdered in the northern Indian state of Jammu and Kashmir. The incident sparked violent protests in the area as the men arrested for the crime are Hindu, and the child belonged to a nomadic community of Muslim shepherds.