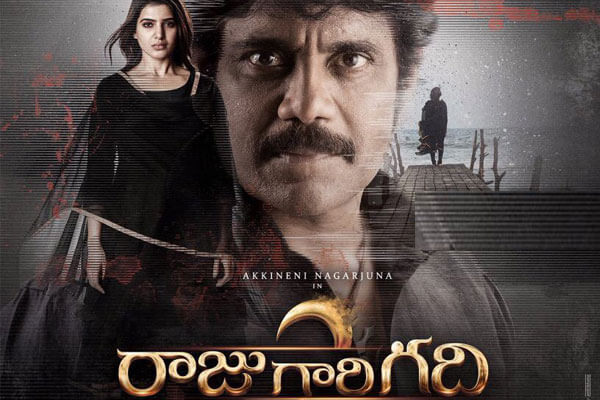 Raju Gari Gadhi 2 is a Telugu Horror comedy film starring Nagarjuna Akkineni, Samantha Ruth Prabhu and Seerat Kapoor Kajal Agarwal in the lead roles. The Movie was directed by Ohmkar and produced by Prasad V Potluri under the Banners of PVP Cinema, Matinee Entertainments & OAK Entertainments. It is a sequel to Raju Gari Gadhi (2015) and the remake of the Malayalam Movie named “Pretham.” Thaman composed the music for Raju Gari Gadhi 2.

Click here for Upcoming Telugu Movies and their Release Dates.

The story of the Raju Gari Gadhi 2 is an old horror thriller of a girl getting murdered because of her problems, and she took revenge on her enemies. The film started with three colleges friends (Ashwin, Kishore, and Praveen) deciding to lead a life by investing in the resort business. At the start of the business, everything goes smoothly until they started to witness the paranormal activities in the resort through the evil spirit (Samantha). Then they decided to contact the nearby church father (Naresh) who suggested them to approach the world-renowned mentalist Rudra (Akkineni Nagarjuna). Did they find the anonymous spirit? Did they escape from the resort? I will leave the rest for you to scream in the theatres.

The Biggest positive of the film is Samantha’s role. She is quite endearing, and her performance in the climax is pretty good as she extracts superb emotions with her expressions. Nagarjuna Akkineni does his part convincingly, and he brings a lot of depth to the film with his screen presence. Vennela Kishore manages to bring some laughs here and there. The background music of the Thaman elevated the movie quite well.

The biggest disadvantage of the film is lack of comedy. The fun that the people expects from this franchise is missing in the movie. The first half of the film is a bit of let down, and things get interested only when Samantha enters into the movie at the second half. Another drawback of the film is entirely predictable.

Overall, Raju Gari Gadhi 2 is a melodramatic thriller which has some good moments here and there. The film will not disappoint or excite you entirely and ends up as a decent watch because of its star cast.