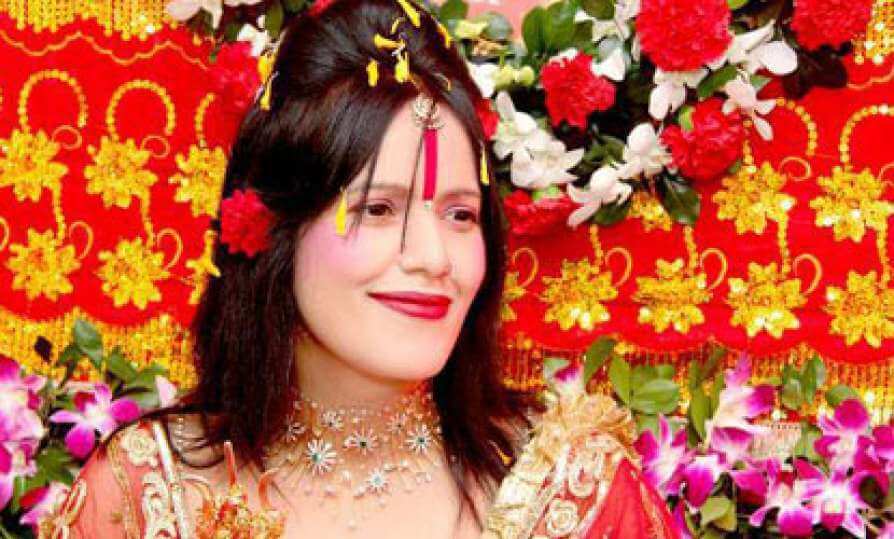 Radhe Maa aka Sukhvinder Kaur is a popular godwoman in some northern regions of India. She started her life as a tailor and used to stitch clothes for her living. She was married at the young age of 17 and by 20 she had two kids. Her husband Mohan Singh worked at the sweet shop of his brother and left for the gulf for a job. Since her childhood, Rahe Maa had been drawn towards spiritualism. While she was a kid, she used to spend a lot of time at the Kali temple at her village and used to attend many satsangs.

Later people started inviting her to their homes for satsangs. Since then she started dressing like a goddess as her reputation started growing. People began to offer her money, gold, and gifts for her satsangs. Sanjeev Gupta, a businessman who runs Global Advertiser invited her to Mumbai and offered his bungalow to her which is now called Radhe Maa Bhawan in Borivali, a posh bungalow that has a large garden, luxury cars, private security, and a few devotees.

In her temple and ashram, thousands of people visit daily, there has been religious gatherings and satsangs happening regularly. Once in two weeks, her house turned temple hosts Mata ki chowki, Jagran, and a satsang.

In 2020, Radhe Maa is entering the Bigg Boss Hindi Season 14. It is said that she is the highest-paid actor of the season with an amount of Rs 25 lakh.

Radhe Maa has been into several controversies for years. In 2015, a Mumbai woman Nikki Gupta filed a complaint against her citing dowry allegations. For which Radhe said, “I was sent to serve her in her Bhwan and she used to treat me like a servant”.

A lawyer named Falguni Brahmbhatt filed a case on her for her obscenity showcasing videos where Radhe was dancing to Bollywood numbers. He has also filed an RTI requesting the information about Mamtamai Shree Radhe Guru Maa Charitable Trust. He got a shocking reply that there is no such trust registered.

There are several other cases of fooling people for money and driving farmers to suicide. Actress Dolly Bindra accused Radhe Maa of forcing her to have sex with one of her followers. A Phagwara resident has accused her of spreading vulgarity.

Her pictures went viral on social media where she was seen in a red mini dress and it was said that she along with her friends were enjoying a party.

Check out the latest photos of the Hindi Bigg Boss 14 contestant and godwoman Radhe Maa,