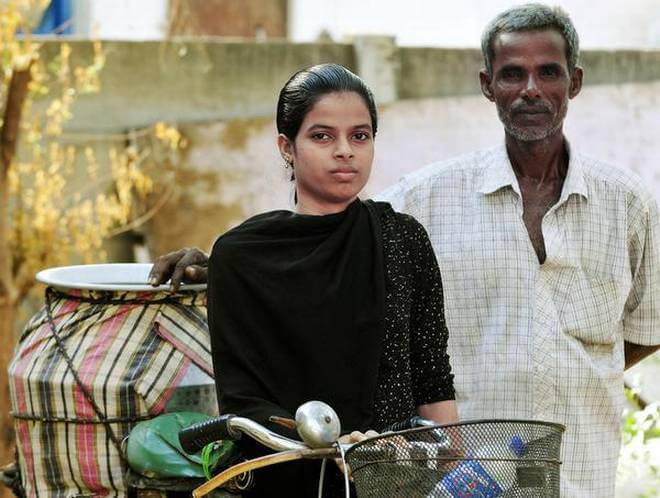 Where Poverty, a death of a near one are no deterrents that prove in a girls life, A. Ashika Beham. She is the daughter of buttermilk vendor braves mother’ s death to show a topper.

For A. Ashika Beham, the daughter of a buttermilk vendor and the Plus Two topper of the Dr. Maduram Corporation Higher Secondary School in Tiruchi, the death of her mother could not have come at a deadly time.

Her mother lost the struggle against lung cancer in January this year just as the girl was busy preparing for the public examination ahead. The inconvenience of having to run the household fell on her.

A. Ashika Beham, the daughter of buttermilk vendor became topper

The girl braved the family tragedy and the added stability to develop the topper in school by scoring 1,101 marks.

The girl, who wants to study medicine, has attended for NEET after undergoing a month-long coaching program, sponsored by actor Suriya’s Agaram Foundation in Chennai, as suggested by her teachers.

“I want to be a doctor; I do not know whether I will manage to get a seat. Though I took the exam in Tamil, the entrance exam was tough except for the questions in Biology,”

She also has no idea either her father, who trades buttermilk at the Gandhi Market in the city on a bicycle and her two elder brothers, both carpenters, would be able to afford her higher studies. Ashika also has a younger sister, who is in Class X now.

Notwithstanding the meager income of the family, her father, A. Abdul Rahim (48), who sells vegetables once the summer is over, is equally resolved to find the means to ensure his daughter gets to pursue higher education.