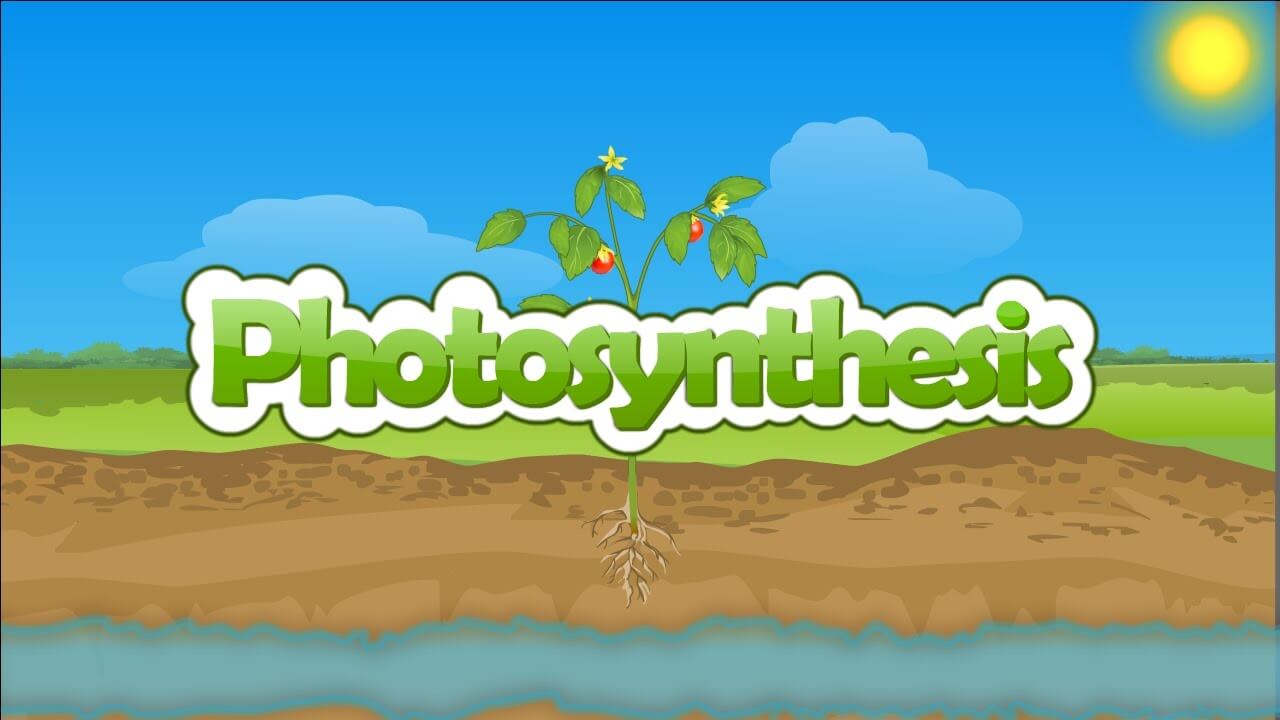 The environment comprises of plants, animals, and human beings. Animals and human beings take food from the plants. The food we take is the plants and naturally, plants do take food from the sunlight and the process is called as photosynthesis. The process by which the green plants and some other organisms use the sunlight to synthesize the nutrients from carbon dioxide and water is termed as Photosynthesis. Photosynthesis in plants generally comprises the green pigment chlorophyll and generates oxygen as a by-product.

The process by which the plants, some bacteria, and some other protistans use the energy from the sunlight and produce glucose from carbon dioxide and water is called as Photosynthesis. The glucose formed can be converted into pyruvate which would releases adenosine triphosphate (ATP) by the cellular respiration. In other words, Photosynthesis is the process in which energy from the sunlight is used to convert the carbon dioxide and water into the molecules needed for growth. These molecules comprise sugars, enzymes, and chlorophyll. The green chemical chlorophyll absorbs light energy, and the energy allows the production of glucose by the reaction between the carbon dioxide and water. Oxygen is also produced as a waste product. The word origin of Photosynthesis has come from the Greek where Photo means “light,” and synthesis means “putting together.”

The word equation may summarize photosynthesis as:

The conversion of usable sunlight energy into the chemical energy is associated with the action of green pigment chlorophyll. 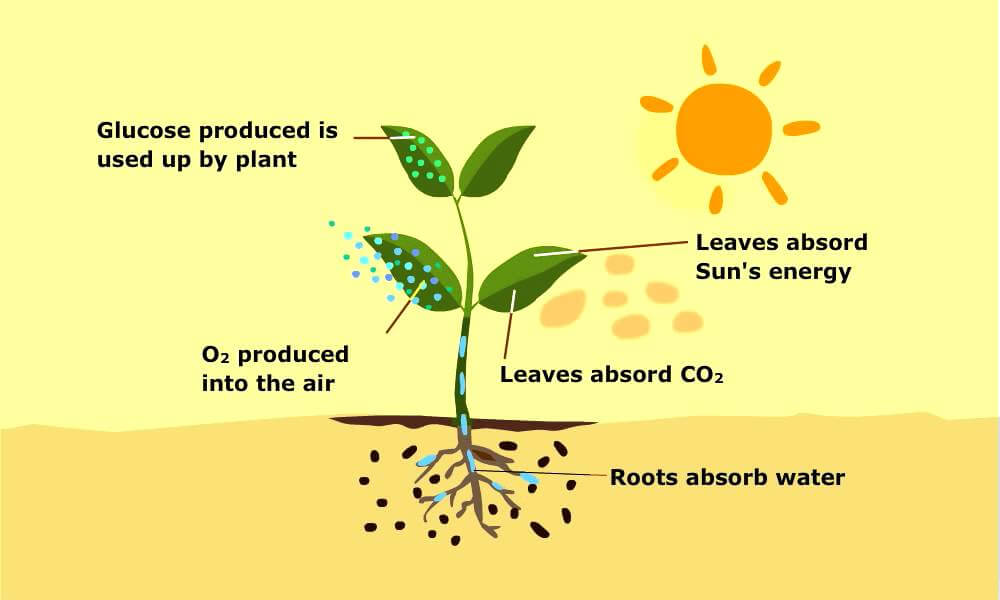 Plants were the only photosynthetic organisms to have the leaves (and not all plants have leaf). A leaf may be observed as a solar collector filled with photosynthetic cells. For plants to perform photosynthesis, they need light energy from the sun, water, and carbon dioxide. Water gets absorbed from the soil into the cells of root hairs. Water enters the root and is transported up to the leaves through the specialized plant cells known as the xylem vessels. Land plants must defend against drying out and so have evolved specialized structures known as stomata that allow the gas to enter and exit the leaf.

Carbon dioxide cannot pass through the protective waxy layer covering the leaf (cuticle), but it could enter the leaf through the stoma (singular form of stomata), flanked by two guard cells. Likewise, oxygen produced during the photosynthesis can only pass out of the leaf through the opened stomata. Unfortunately for the plant, while these gasses are moving between the inside and outside of the leaf, and a large amount of water is also lost.

The Structure Of Chloroplast & Photosynthetic Membranes

The thylakoid is the structural unit of the photosynthesis. Both photosynthetic prokaryotes and eukaryotes have these flattened sacs or vesicles containing photosynthetic chemicals. Only eukaryotes have the chloroplasts with a surrounding membrane. Thylakoids are stacked like pancakes in stacks collectively known as grana. The areas in between the grana are referred to as stroma. Whereas the mitochondrion has two membrane systems, the chloroplast has three, forming three compartments. 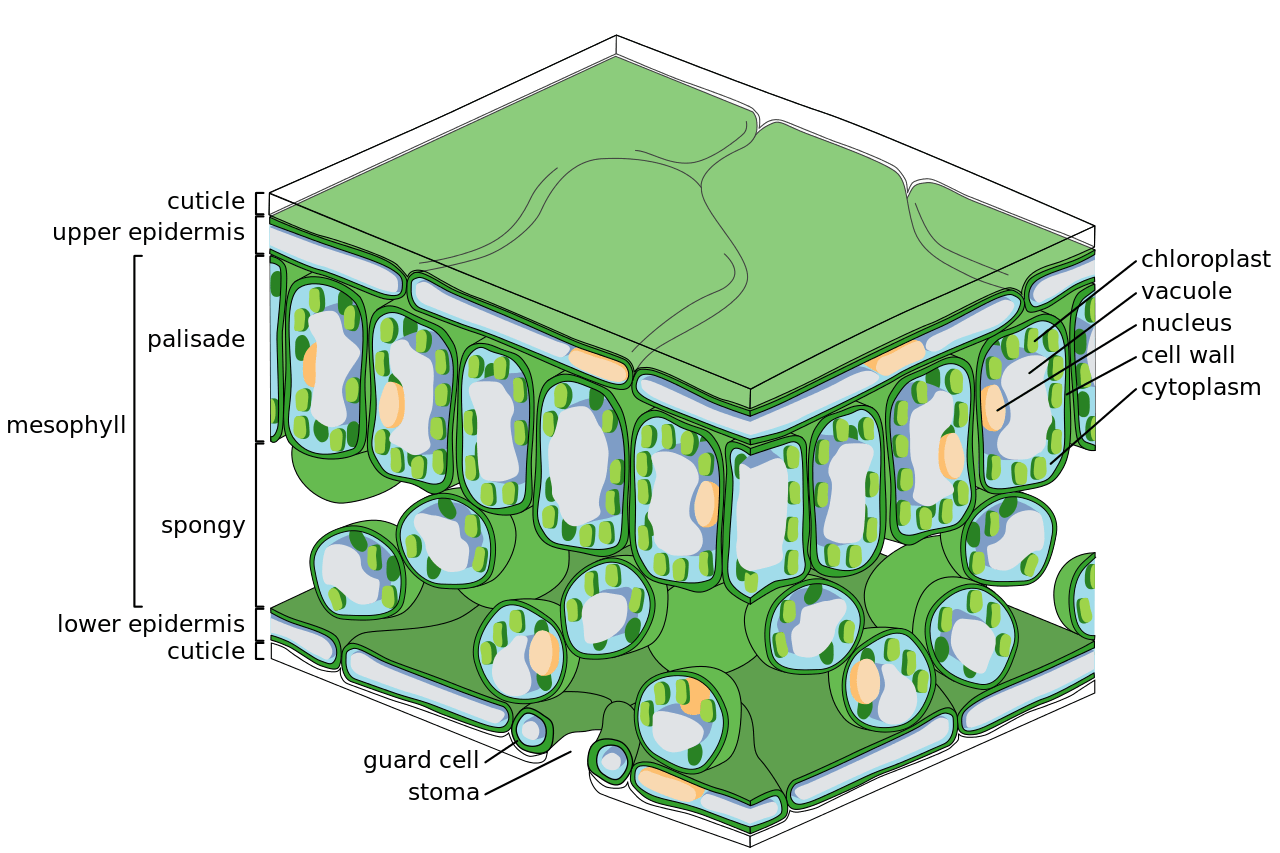 When chlorophyll a absorbs the light energy, an electron gains the energy and is ‘excited.’ Then the excited electron is transferred to another molecule which is called a primary electron acceptor. The chlorophyll molecule is oxidized (loss of an electron) and has a positive charge. Photoactivation of chlorophyll a will results in the splitting of water molecules and the transfer of energy to the ATP and reduced nicotinamide adenine dinucleotide phosphate (NADP).

The chemical reactions involved include:

Photosynthesis in plants takes place in two stages. These stages were known as the Light Dependent Reactions and the Calvin Cycle.

The first stage in the photosynthesis is the light-dependent reactions. These reactions will take place on the thylakoid membrane inside the chloroplast.  During which, the light energy is converted into ATP (chemical energy) and NADPH (reducing power). 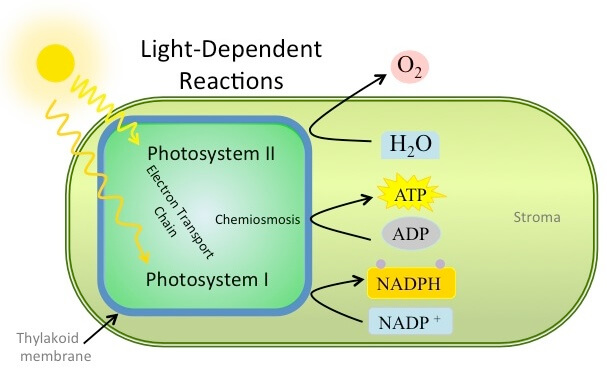 The electrons have now arrived at PSI

The energy changes that are accompanying the two sets of changes make a Z shape when drawn out. And this is why the electron transferring process is sometimes called the Z scheme. The key to the scheme is that sufficient energy gets released during the electron transfer to enable ATP to be made from the ADP and phosphate.

Flow of the Electrons

The second stage of photosynthesis is the Calvin Cycle.  These reactions will occur in the stroma of the chloroplast.  Energy from the ATP and the electrons from NADPH are used in converting the carbon dioxide into glucose and other products.

Two G3P molecules are required to make one molecule of glucose. 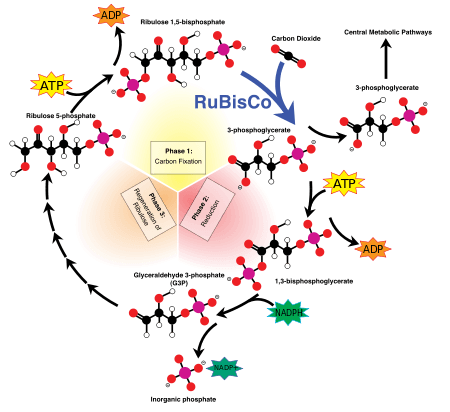 Take another look at the photosynthesis equation, and you would notice that of about six molecules of carbon dioxide (6CO2) are required for the processing of photosynthesis.

Two molecules of G3P would be used to produce glucose and the other ten will be used for the regeneration of RuBP.

Thus the balanced equation for the photosynthesis is

The equation can be written out in words as,

Photosynthesis can be represented using a chemical equation as,