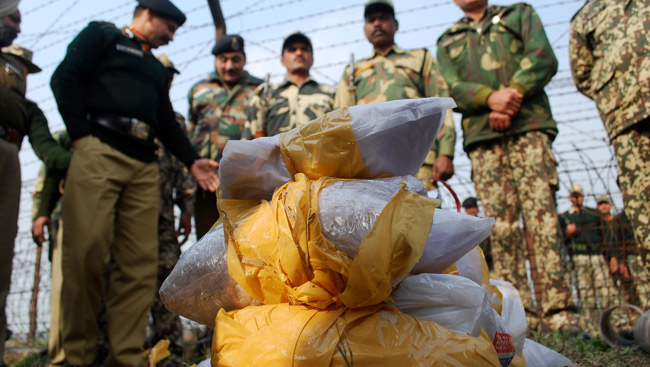 Pakistan smugglers are now using trained divers to swim all the way to Punjab to smuggle the drugs. As per the intelligence source, “Narcotics smugglers from Pakistan uses trained Divers to cross the (IB) International border to reach Punjab of India.”

As the Border Security Force tightened its security in the recent years, the smugglers were not able to smuggle the goods from India. Hence Pakistan Smugglers employed and trained divers to swim all the way to Punjab’s Ferozpur, Gurdaspur and Amritsar sectors which belong to a 35km riverine area of Punjab. The Border Security Force recently deployed larger men along the borders along with new devices such as UAV (Unmanned Aerial Vehicle), Laser walls and thermal images to stop the drug supply.

In the past three years, BSF has seized 729 kg of Narcotics (most of it is heroin) which is worth hundreds of crores. The Border Security Force guards a total of 553km (518km land and 33 km river) stretch along the International Border of Punjab.

In the year 2015, BSF seized 344 kg of drugs followed by 222 kg in 2016 and 163 kg in 2017. The 344 kilograms seize was the highest which drastically reduced in the following years due to high security. Intelligence officials said that the Pakistan smugglers are using highly equipped devices with complete gears and they are using Saltuj and  Ravi river to enter Punjab. The divers carry a transborder communication through Whatsapp.

“We are using various approaches, including technology, to seal the unfenced river gaps, but scuba divers are showing to be a real challenge,” said a senior BSF officer of Ferozpur sector in Punjab. The Border Security Force Jawans have sent this information to the top officials. They have also discovered that smugglers are using simple farmers from the Indian side as their couriers. Recently, several farmers were caught with the narcotics hidden in their agriculture tools. J K Virdi, a commandant of 105-Battalion of BSF that looks after the Hussainiwala border in Ferozepur sector, said that drug smuggling in this area is being addressed efficiently by the Indian troops.

Read also, Best 5 Holiday destinations in India for the New Year as well.